A £215,000-a-year BBC journalist was today embroiled in an impartiality row after claiming Boris Johnson had ‘berated’ the EU over the coronavirus vaccines dispute.

Europe editor Katya Adler, 48, who is based in Brussels, prompted fury with a tweet after the EU tried to requisition tens of millions of vaccine doses made from the UK.

The married mother-of-three was commenting on a Politico report claiming Britain restricted exports of 100 medicines which could be used to treat Covid-19 patients.

But her claim about the Prime Minister was criticised with Twitter users pointing out he had not waded into the row and instead spoke of countries working together. 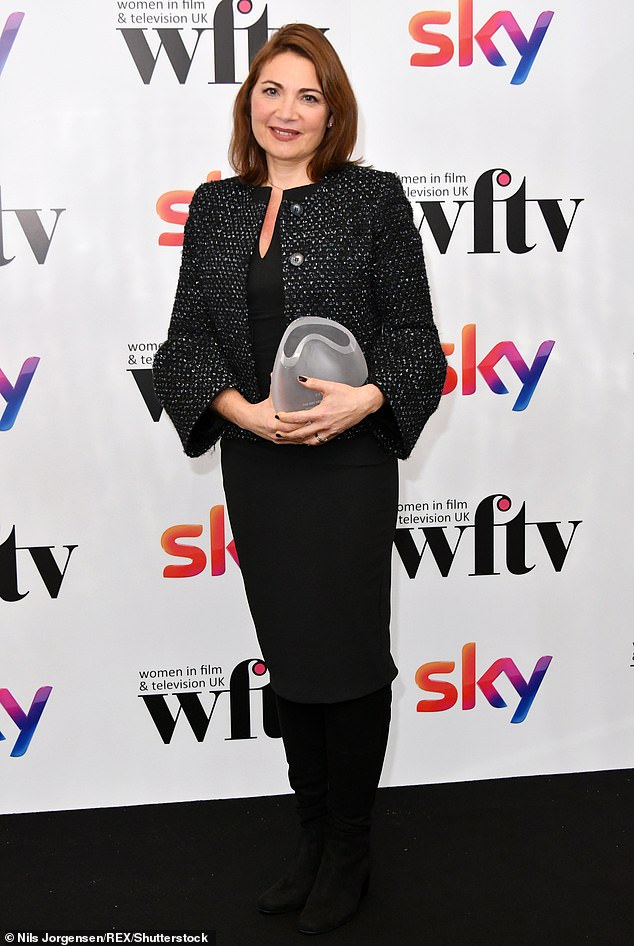 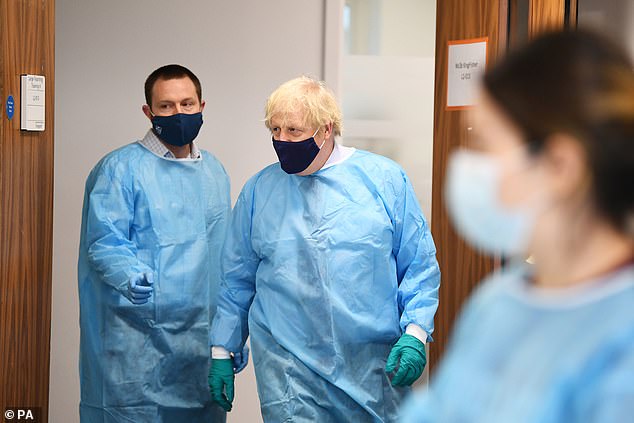 Under a link to the Politico report, Adler wrote at about 9am today: ‘While people everywhere suffer and die from Covid, the vaccine dispute between governments and with pharmaceutical companies is getting uglier and exposing hypocrisy.

‘The EU lectured the world about ‘vaccines for all’ and now is considering an export ban on vaccines.

‘But while the Johnson government berates the EU, the UK has banned the export of over 170 medicines ‘needed for British patients’ included dozens reportedly used in treating Covid patients.’

Among those unimpressed was Daniel Cremin, who tweeted: ‘I’ve complained on the grounds of editorialisation and a lack of due impartiality – a journalist displaying personal political bias with baseless claims.’

Former Brexit Party MEP Rupert Lowe said: ‘I have my problems with this Government but this statement is clearly false. They’ve been remarkably calm compared to the screeching coming from the EU. Another reason to 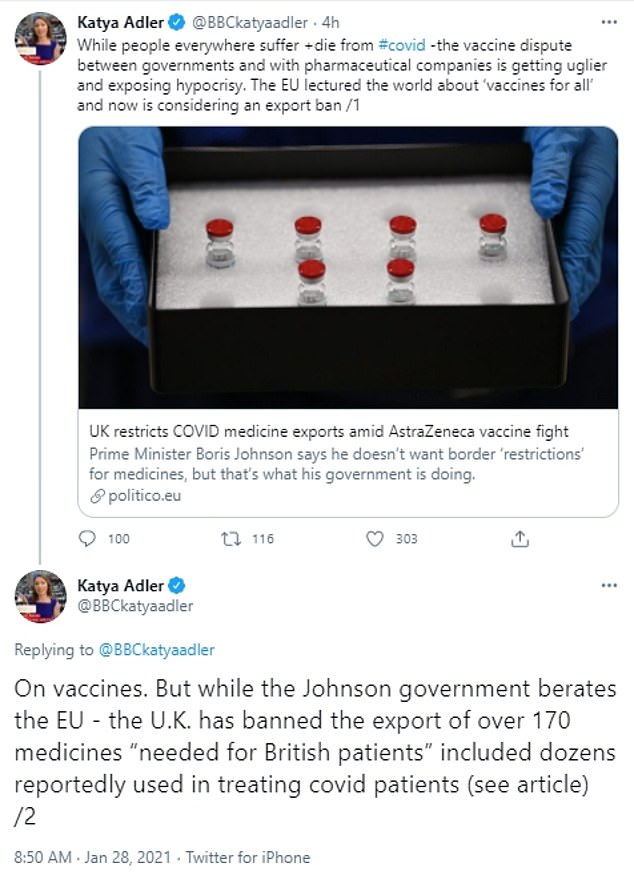 Carol Donaldson added: ‘Boris Johnson has not berated the EU at all. Still refers to them as friends and partners – a description which they don’t currently deserve.’

And Alan Whitmore tweeted: ‘Your left wing political bias is showing. Boris has not berated the EU. Apology required.’

A further Twitter user, Max, said: ‘Boris Johnson has not ‘berated’ the EU. His response has been very measured. Lacking a bit of impartiality here, Katya Adler.’

Speaking at a Downing Street press conference last night, Mr Johnson would not be drawn on the EU’s threat to redirect vaccine doses produced for Britain. 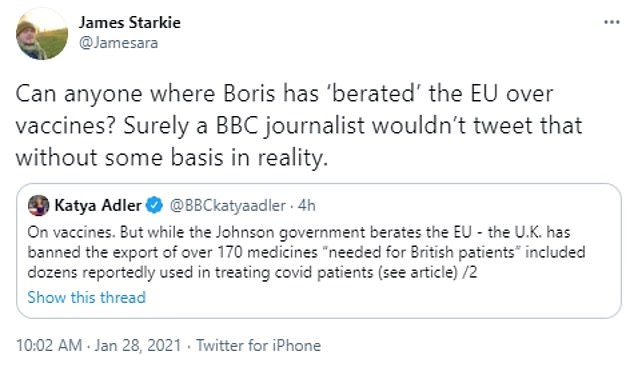 Mr Johnson, who refused to criticise Brussels, also referred to ‘our friends and partners’ within the EU during the press conference.

And today, Cabinet minister Michael Gove said there ‘will be no interruption’ to UK vaccine supplies from AstraZeneca after the EU demanded doses from British plants during a row over supply shortages.

Mr Gove said the ‘first and most important thing’ is that the supply schedule agreed with the UK-based pharmaceuticals giant is honoured so the domestic vaccine rollout can be delivered before neighbouring nations are aided.

EU health commissioner Stella Kyriakides said there have been ‘constructive’ talks with AstraZeneca chief executive Pascal Soriot after telling the firm it is contractually obliged to send jabs produced in the UK to 27 EU member states as the bloc faces supply shortages.

Meanwhile, Belgian authorities carried out an inspection at an AstraZeneca coronavirus vaccine plant in Seneffe, near Brussels, yesterday. 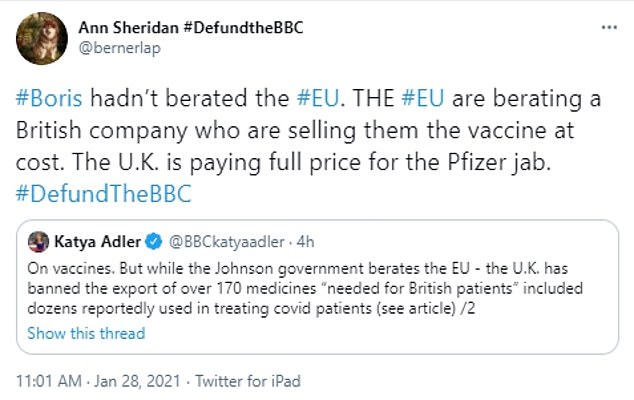 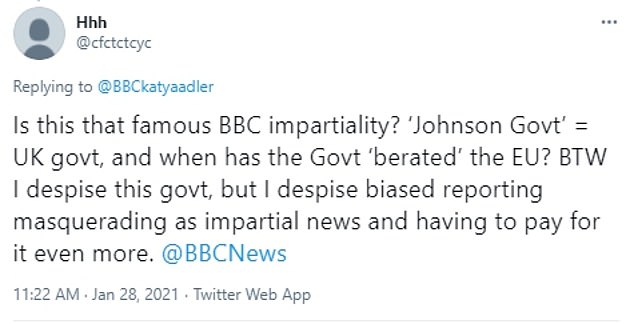 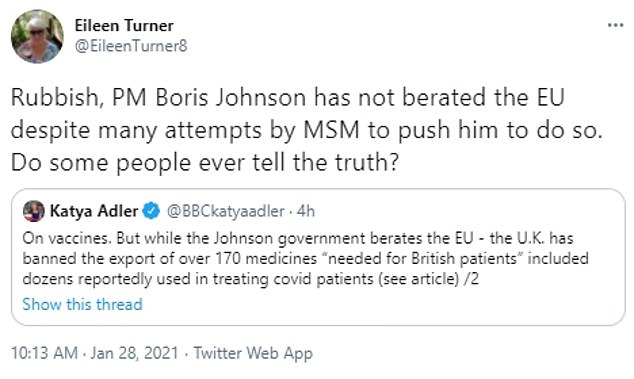 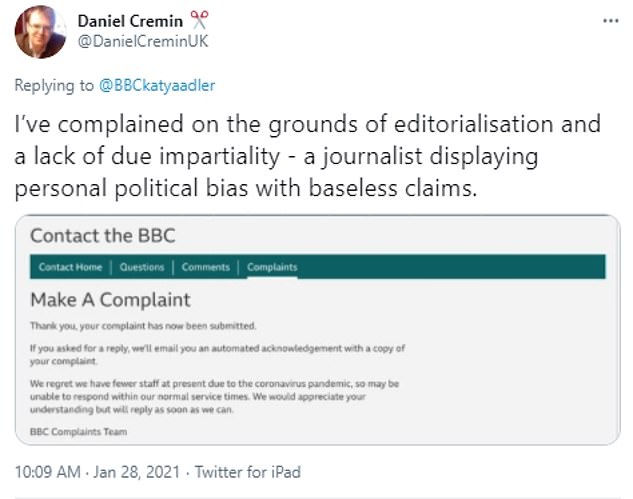 A statement from Belgium’s health ministry was reported to say the spot check was carried out ‘to make sure that the delivery delay is indeed due to a production problem’.

Sir Jeremy Farrar, a member of the Government’s Scientific Advisory Group for Emergencies, said vaccine nationalism, where nations prioritise their own access to the detriment of others, must be avoided.

Labour leader Sir Keir Starmer said the issue should be resolved through increased production rather than UK doses being diverted to the EU.

It comes after the BBC’s complaints unit found last September that the editor had breached impartiality rules after branding Michael Gove ‘delusional’ in a tweet.

Ms Adler, Europe editor since 2014, slammed comments by the Cabinet Office in April 2020, after he said ‘the Covid crisis, in some respects, should concentrate the minds of EU negotiators, enforcing the vital importance of coming to a conclusion’.

In response, Ms Adler wrote: ‘Am not first to comment on this today but below observation by Michael Gove that #coronavirus will focus EU minds on post #Brexit trade deal is delusional. It distracts EU leaders all the more from something which was not top of in-tray even before Covid-19.’

A member of the public complained to the BBC over the use of the word, and the BBC’s Editorial Complaints Unit agreed that it breached internal guidelines.