Bradley Constant, 22, had just finished a shift at a grocery store when he found out that he would soon be playing an integral part in the telling of Dwayne Johnson’s life story. “

I came home and I was playing X-Box,” Constant told me. “I got a call from my rep who said, ‘Hi, am I speaking to the one who is starring as Dwayne Johnson at 15 years old in the new show Young Rock?'”

Constant stars as a teenage Johnson in the NBC series Young Rock, an autobiographical sitcom about the 48-year-old actor’s formative years. Not only does the project mark Constant’s first major television role, but in a sense, it’s also a full-circle moment for him, having grown up watching Johnson as a wrestler on WWE. “It was just so exciting,” Constant recalled. “I closed my eyes and just did not know what to say. Then I FaceTimed my grandparents and they were crying and my brothers — that was the most amazing situation because my family, my grandparents, and my brothers had been with me since I decided to pursue something like this 10 years ago.”

Though Constant admits that he was only four or five years old when he used to watch wrestling with his dad in the living room, he remembers being obsessed with The Rock and his bravado. “He’s just the coolest dude on TV,” Constant said, referring to Johnson. “The first movie I saw him in was Walking Tall and I’ve followed all his movies ever since. I love it all.” Given how big of a fan Constant is of Johnson’s, it was only natural for him to be nervous to work alongside the actor, however, the nerves immediately faded away once they began talking. “He never placed any crazy expectations on me. He really just kind of tempered my nervousness,” Constant explained. “He’s just so genuine and so down-to-earth. He talks to you person to person, like anyone . . . He really just reminded me to be myself and have fun. I think that’s one of the best things he told me.”

Young Rock focus on three defining chapters in Johnson’s life: when he was 10 years old living in Hawaii, when he was 15 years old after multiple arrests, and when he was 18 years old trying to get his life back on track while attending the University of Miami. When I asked Constant what part of the show’s narrative stood out to him the most, his answer was simple: “the aspect of family.” “It’s very present in every timeline, every episode,” Constant added. “[Johnson’s] talked about buying the car and all that. That’s really funny, but there are these really beautiful moments between him and his mom, the dynamic of relationship he had with his dad . . . It’s just such an awesome contrast. Tons of funny stuff, but also right after that, a very relatable truth of life. It’s not all glamorous and a shiny, glossy reflection on a superstar’s life. It’s a real guy with an awesome, inspiring story with incredible characters and real people.”

As for his favorite scene, Constant excitedly noted a scene from the second episode, where his crush Karen comes into the pizza shop he works at. Without divulging too many details, Constant added, “I’m nervous, I’m freaking out with my buddy Gabe. We’re like, ‘What do we do? What do we do? We got to impress the girls. Look cool.’ So in the most awkward terrible way, we try to look cool as she walks into the pizza shop. I walk over with confidence and I do an amazing impression to impress her and it works out and I get her number. It’s one of my favorite scenes to shoot. I wish I could have shot it 100 times more.” 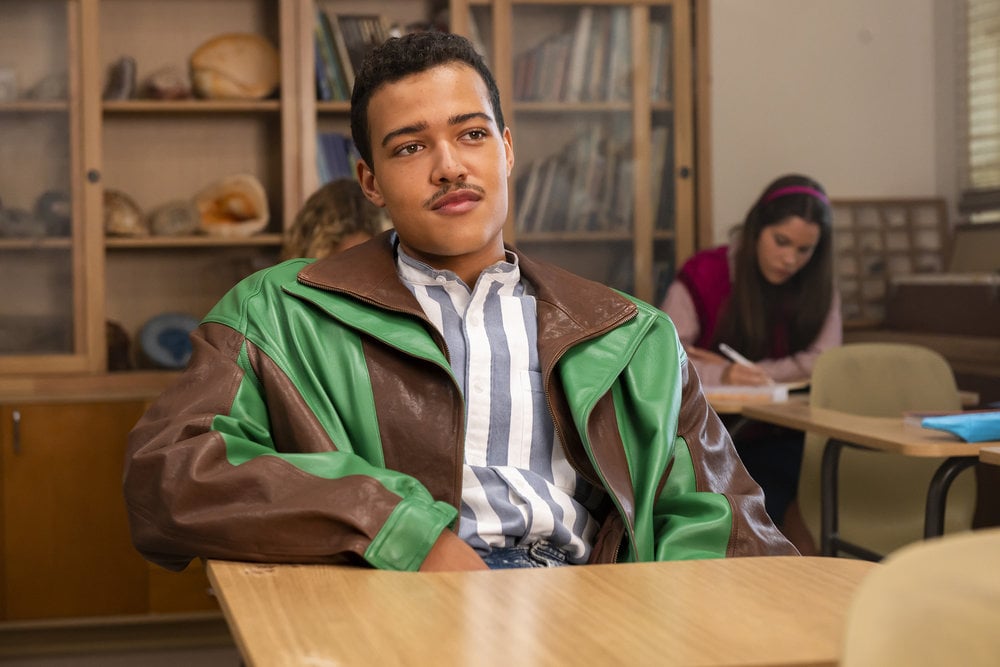 Even though Young Rock centers on Johnson’s life, Constant hopes that people are able to see parts of themselves in all the different versions of Johnson. “A huge part of this is not judging people, not judging a book by its cover,” he explained. “There are layers to people, there’s a complex reality behind what you see. You could be seen as a punk kid, but he’s really a good kid dealing with tough issues at home and he loves his mamma. You know? I really want people to take away that real aspect in the show . . . No matter what you’re going through, what you’ve been through, you can have positive outcomes.”

Looking towards the future, Constant doesn’t have any crazy expectations, he just hopes Young Rock gets picked up for a second season. However, being in a Stars Wars film is on his bucket list, so I’ll just go ahead and put that out into the universe for him.

Watch Bradley Constant on Young Rock on NBC every Tuesday.