Covid Australia: Everything you need to know about the vaccine

Where you’ll sit on the Covid priority list, where to go and how long to wait between jabs: Everything you need to know about Australia’s coronavirus vaccine in one minute

Vaccinations for Covid-19 will be rolled out in Australia within weeks, but there a strict protocol of who receives the jabs first.

The process is already underway in the US, the UK, Israel and many other European nations.

* When will vaccines be available?

It depends on your age, health and job. First in line are the elderly, vulnerable, frontline health workers, hotel quarantine staff, as well as aged and disability workers and residents. That is expected to being in late February with the Pfizer vaccination.

Other Australians over the age of 16 will be then be ranked by health risk to determine when they get the jab, with those more vulnerable prioritised. The government expects the AstraZeneca vaccine to get approval soon so it will be available in early March.

Health Department boss Brendan Murphy has said it’s unlikely people will get to pick if they get the Pfizer or AstraZeneca vaccine, as it depends on their profile and category of risk.

The government wants the vaccine rollout to be complete by the end of October. 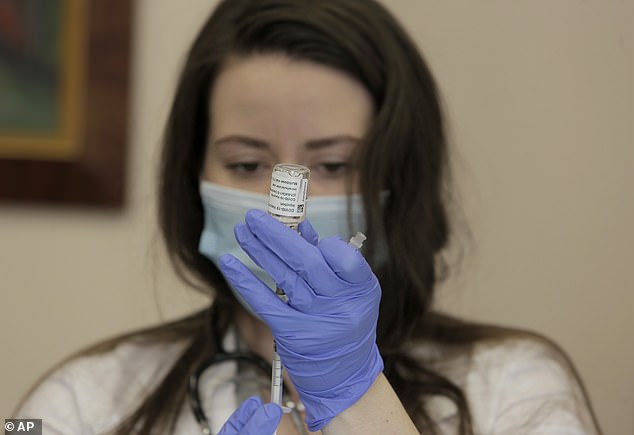 Australia has ordered 150 million vaccines – meaning it can give enough jabs to every citizen twice (pictured, a scientist with the AstraZeneca vaccine)

* What about Australians under the age of 16?

The Pfizer vaccination approval does not cover people under the age of 16, but it has no upper age limit. The medical regulator says the benefits of the vaccination for people over the age of 85, or those who are frail, should be weighed against potential risk of even a mild response.

Age limits for the AstraZeneca vaccination will be outlined in the Therapeutic Goods Administration’s approval.

Both vaccines are two doses – so Australians will get two at least 21 days apart. They will need to be from the same company.

* Where will they be administered?

General practitioners and pharmacies have put their hand up to be involved, and there’s expected to be pop-up clinics at current COVID-19 testing centres and hospitals. 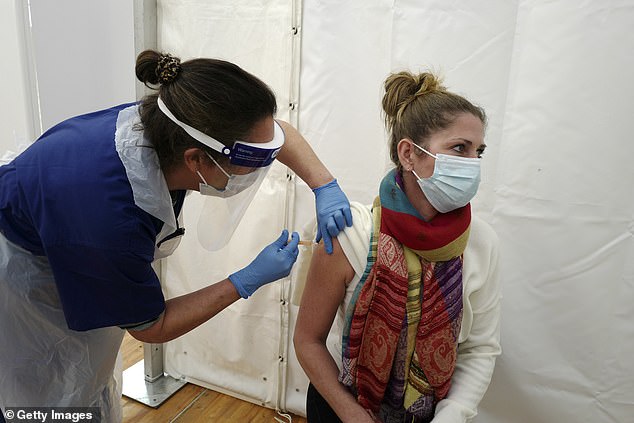 A woman receives the AstraZeneca vaccine in Cornwall in the UK (pictured on February 1). Australia will begin its roll-out soon

* How can Australians prove they’ve been vaccinated?

Jabs will be recorded on the Australian Immunisation Register. Certificates proving vaccinations will then be available either digitally or in hard copy. The government says this might be needed for interstate and overseas travel.

* How many vaccines has Australia ordered?

Australia has secured more than 150 million doses of various vaccines, including almost 54 million doses of the AstraZeneca vaccine, with the vast majority to be manufactured in Melbourne. As well as more than 51 million from Novavax.

* Are the coronavirus vaccines different from others?

Yes – they come in multi-dose vials so healthcare workers will soon receive mandatory training to administer them. The Pfizer vaccine has six doses per vial and the AstraZeneca option has 10. Nobody will be allowed to administer vaccines unless they have completed the online course. The training also aims to minimise wastage.

WHICH VACCINES HAS AUSTRALIA SECURED?

The Australian Government has joined the COVAX Facility as part of a global effort to support rapid, fair and equitable access to COVID-19 vaccines. This participation enables us to purchase vaccine doses for Australia as they become available

This includes the Moderna vaccine, CureVac, Inovio and others

Australia had ordered 51 million doses. However, the deal has been scrapped after trial participants returned false positive results for HIV