Derbyshire cheese maker loses 20% of its business due to Brexit

Exports of UK goods to the European Union dropped by more than forty per cent in January as Britain and Brussels began their post-Brexit trading relationship.

New data published this morning by the Office for National Statistics revealed that the overall export of goods fell by £5.3billion – some 19.3 per cent – in the first month of the year.

This was largely driven by a 40.7 per cent fall in exports to the EU, worth an estimated £5.6billion.

Meanwhile, imports of goods to the UK also suffered a significant hit, falling by £8.9billion overall, approximately 21.6 per cent.

This was largely as a result of a 28.8 per cent fall in imports from the EU, worth an estimated £6.6billion.

Labour claimed the numbers illustrated ‘just how many British businesses have been struggling with the new reams of costly red tape and bureaucracy’ following the end of the Brexit transition period. 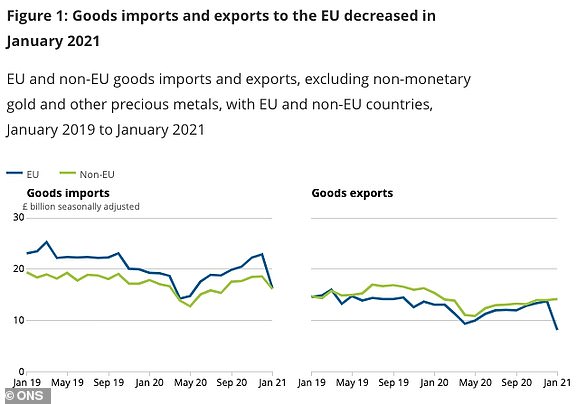 UK imports and exports to and from the EU fell significantly in January after the end of the post-Brexit transition period, according to data published by the Office for National Statistics 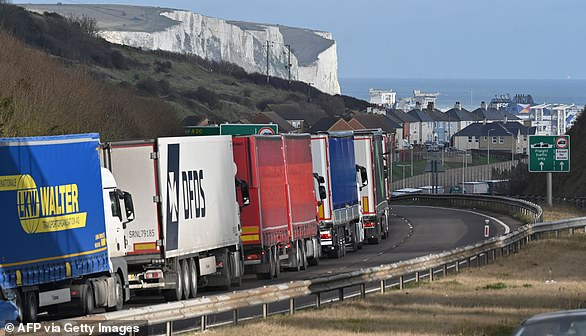 The overall exports of goods fell by £5.3billion – some 19.3 per cent – in the first month of the year, this was largely driven by a 40.7 per cent fall in exports to the EU, worth an estimated £5.6billion

The latest ONS numbers came one day after Michael Gove announced that Britain will delay the introduction of post-Brexit border controls on some imports from the EU because of coronavirus disruption.

The Government had agreed to phase in customs requirements for GB imports from the EU over a six-month period in the first half of 2021.

But the Government has now extended the timetable by a further six months after businesses said they needed more time to prepare.

Suren Thiru, the head of economics at the British Chambers of Commerce, said the trade numbers showed ‘difficulties faced by businesses on the ground go well beyond just teething problems’.

He said: ‘While changes in data collection limit historic comparisons, the significant slump in UK exports of goods to the EU, particularly compared to non-EU trade, provides an ominous indication of the damage being done to post-Brexit trade with the EU by the current border disruption.

‘Continued coronavirus restrictions and the unwinding of Brexit stockpiling also added to downward pressure on trade between the UK and EU in January.

‘The practical difficulties faced by businesses on the ground go well beyond just teething problems and with disruption to UK-EU trade flows persisting, trade is likely to be a drag on UK economic growth in the first quarter of 2021.

‘Although the postponement of import checks will help avoid exacerbating the current disruption, there must be a greater focus on long-term solutions to improving the flow of UK-EU trade. Offering tax credits to support firms to adapt to the new arrangements would help many address new burdens and requirements better.’

The latest numbers published by the ONS do come with a health warning from the organisation. 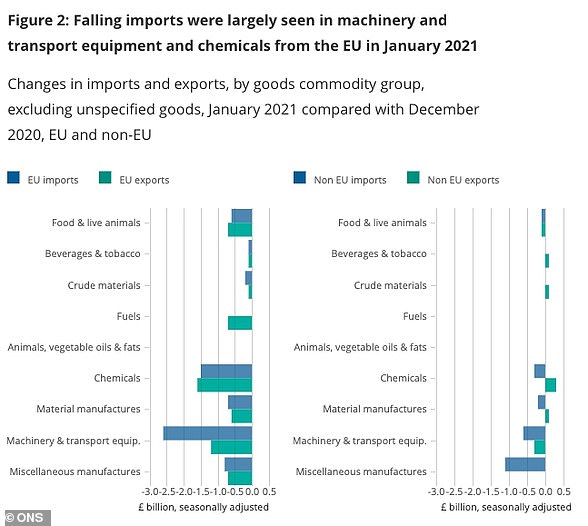 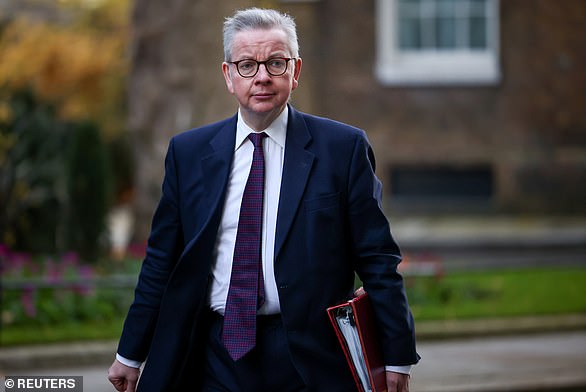 It said that ‘monthly data are erratic and small movements in these series should be treated with caution’.

The ONS pointed out that January is the first post-Brexit month of trade after the end of the transition period on December 31 while the UK also faced another coronavirus lockdown at the same time as it rolled-out new border arrangements.

The ONS said that November and December last year had seen increasing imports and exports of goods ‘consistent with potential stockpiling of goods from the EU in preparation for the end of the EU exit transition period’.

It noted that UK imports from the EU had previously peaked in the weeks leading up to previous Brexit deadlines in March and October 2019.

‘All of these are potential contributing factors to the fall in January trade in goods,’ the ONS added.

Rachel Reeves, Labour’s shadow chancellor of the Duchy of Lancaster, said: ‘These figures make it clear just how many British businesses have been struggling with the new reams of costly red tape and bureaucracy this Government has wrapped them in.

‘The Government must up their ambition here, and take practical action, hand in hand with businesses, to build on the limited deal they negotiated with the EU.’

A Government spokesman said: ‘A unique combination of factors, including stockpiling last year, Covid lockdowns across Europe, and businesses adjusting to our new trading relationship, made it inevitable that exports to the EU would be lower this January than last.

‘This data does not reflect the overall EU – UK trading relationship post Brexit and, thanks to the hard work of hauliers and traders, overall freight volumes between the UK and the EU have been back to their normal levels since the start of February.

‘Many businesses have adapted well, and our focus now is on making sure that any business that is still facing challenges gets the support they need to trade effectively with the EU.’

These US cities defunded police: ‘We’re transferring money to the community