Get outta my way! Dog growls in protest as coywolf stops the traffic to let other pack members cross road

By Bhvishya Patel For Mailonline

This is the comical moment a dog growls in protest at a pack of wolves crossing the road as he watches them from inside a car.

Border collie-poodle cross Sam can be heard making his feelings known as a coywolf acts as a crossing guard for younger pack members in in Algonquin Park, Ontario.

The alpha animal stands in the middle of the road in front of the car until the more junior coywolves have made their way across.

The dog continues to vent his frustration as the wolves slink into the woods. 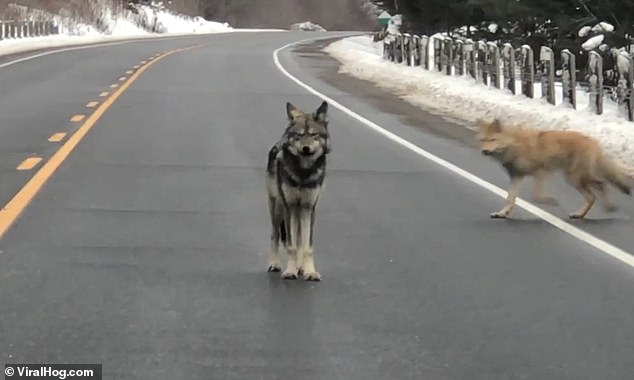 The border collie poodle named Sam barks as the alpha coywolf and his pack cross the road in Algonquin Park, Ontario 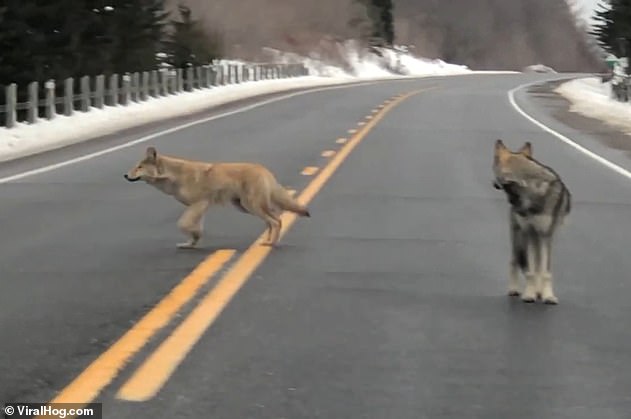 During the clip, which was captured on December 20 last year, Sam begins to bark and startles the alpha wolf.

As the car begins to edge forwards, the dog growls once more as he watches the pack make their way into the nearby woods.

‘On our frequent crossing of Algonquin Park in Ontario we often need to slow to stop for a range of animals, from porcupines to moose, and in this case, for a pack of coywolves.

‘The juveniles are fluffy beige and their alpha is the grey one – acting here as a crossing guard for his family, standing boldly in the center of the road to catch my attention and get me to stop.

‘Once everyone had passed, he allowed me to continue on.

‘Sam was mostly upset he did not get to join them for a frolic in the woods. His wild nature expressed in almost human language.’ 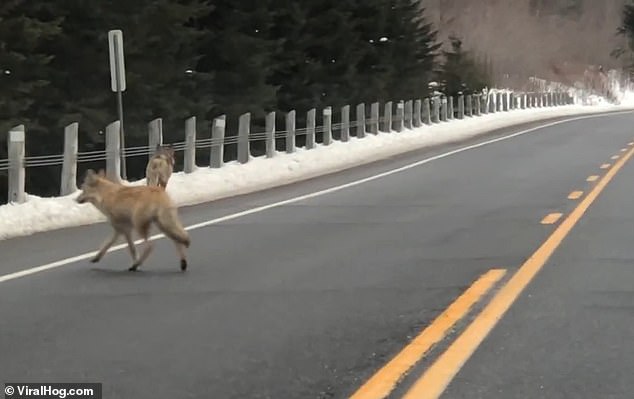 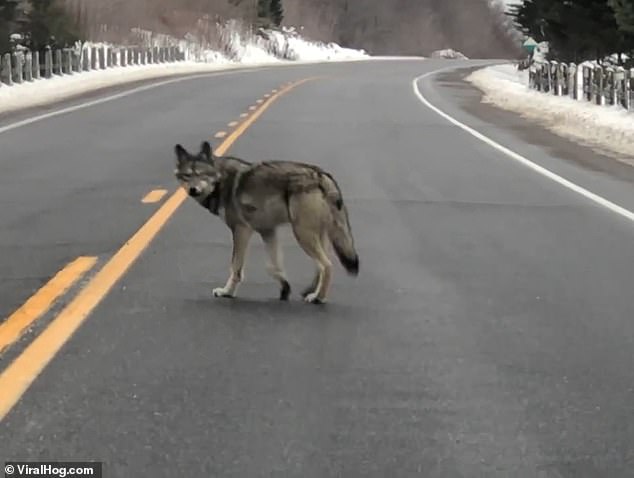 Coywolves are a type of canid descended from coyotes, eastern wolves and grey wolves.

The hybrid species typically feature a thick coat, long legs and bushy tail and reach up to five feet in height.

The wolves, which can be spotted in southern Ontario, Quebec and throughout the Maritime provinces, will feed on everything from berries and seeds to small mammals and spend most of the year in their dens.