EU chief Ursula von der Leyen has warned that more vaccines will be blocked from export, saying that the move against Australia last week ‘was not a one-off’.

‘AstraZeneca delivered less than ten per cent of the amount ordered to the EU in the period from December to March,’ Ms von der Leyen said as she attempted to justify the embargo of 250,000 jabs destined for Sydney.

Italy last Thursday made first use of the controversial export control mechanism which was hastily pushed through by the EU in January when it bitterly accused AstraZeneca of diverting jabs meant for the bloc to Britain.

As a result, Brussels has been flailing around diplomatically: blaming Britain, blocking Australia and begging the United States for doses of a vaccine which just weeks ago it claimed was ‘ineffective’ in the elderly. 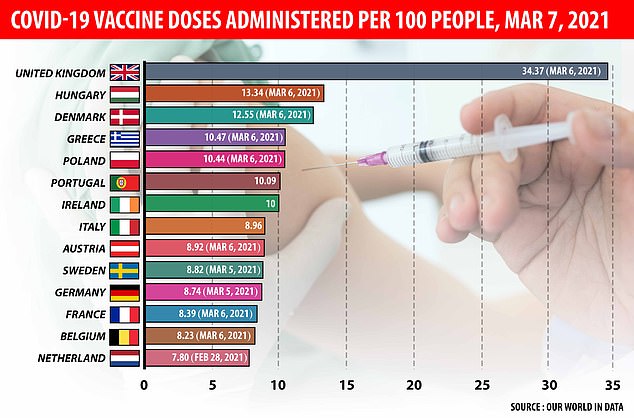 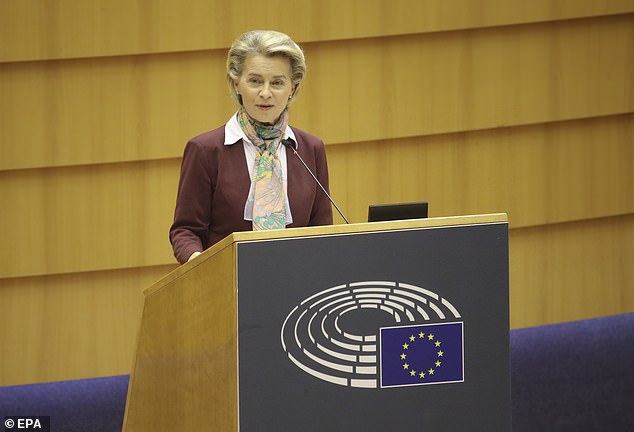 European Commission President Ursula von der Leyen during a speech for the International Women’s day celebration during a plenary session of the European Parliament in Brussels, Belgium

European leaders have been trying to deflect blame onto the Anglo-Swedish jabs manufacturer AstraZeneca for failing to meet its contractual obligations.

But Britain and the US have both managed to secure millions of doses for their populations because they invested more and gave swift approval to the vaccines by cutting red tape.

Former Tory leader Sir Iain Duncan Smith told the Mail on Sunday that the EU was now ‘scrabbling around to grab hold of anything they can get their hands on’.

‘This vaccine debacle exposes what the EU is all about,’ he said. ‘It’s an insular, protectionist organisation that actually believes it is the most important place on earth.

‘They simply cannot accept that they have screwed up. First of all, they blame the British. Then they accuse Australia. Now they are going cap in hand to America and essentially saying, “You’ve got spare vaccines, give them to us.” It’s absolutely pathetic.’

The EU has turned its attention to Washington who it hopes will give them millions of spare doses of AstraZeneca, the Financial Times reported over the weekend.

Joe Biden and Ms von der Leyen spoke on phone call on Friday to discuss their joint efforts in the pandemic.

Following that conversation, Thierry Breton, the EU’s internal market commissioner, was tasked with working with Jeffrey Zients, the US Covid tsar, on vaccine supply chains.

Brussels, which hopes for stronger ties with the White House with Biden in charge, is reliant upon the States for some of the raw materials needed to make jabs.

It’s an embarrassing U-turn for the EU after it claimed the AstraZeneca vaccine was ineffective in the over-65s.

Emmanuel Macron sparked outrage when he claimed it was only ‘quasi-effective’ for elderly people.

But French PM Jean Castex admitted last week that it was ‘very efficient’ and worked just as well as other jabs.

AstraZeneca says it remains on track to deliver 40 million doses to the EU by the end of the first quarter – a figure revised down from an original forecast of 90 million.

It has also informed the EU that it is likely to miss its target for the second quarter by 50 per cent.

Referring to vaccines generally, Ms von der Leyen told the Stuttgarter Nachrichten newspaper that she expected the EU to receive 100 million doses every month from April.

This, she said, had been made possible by higher delivery volumes and the regulatory approval of more vaccines.

The EU would receive ‘in the second quarter an average of around 100 million doses a month, in total 300 million by end June’, she said.

By February 26, the bloc with a population of 446 million people had received 51.5 million doses, according to official EU data.

The bloc has already approved three vaccines – BioNTech/Pfizer, AstraZeneca/Oxford and Moderna – and the European Medicines Agency is due to decide on Thursday on the Johnson & Johnson single-shot jab.