Travelers forced to quarantine in hotels upon arrival in Canada claim they have been sexually assaulted in their bedrooms, underfed and badly treated in conditions likened to jail.

Justin Trudeau announced draconian Covid restrictions requiring people entering the country to isolate in a government-mandated hotel for three nights at their own expense while awaiting a negative test result, at a cost of at least $2,000 per person.

The quarantined travelers have to pay for their accommodation, food, and safety measures at the hotels which are linked to the country’s four international airports in Calgary, Vancouver, Toronto and Montreal. 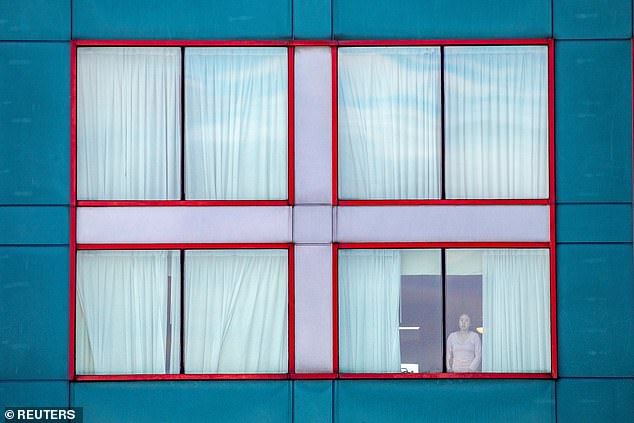 But guests have complained about their treatment inside the hotels where they are forced to stay inside their rooms and are delivered food that has been described as ‘slop’, while others said some meals never arrived.

Footage taken by one traveler shows a group of around 30 frustrated guests gathering in the lobby of Sheraton Toronto to protest their treatment after they were left hungry and without water for hours.

One exchange saw a woman tell one of the hotel staff: ‘We are guests, not animals!’

Others were forced to wait together in a crowded room full of people during check-in, defeating the purpose of the mandatory quarantine and putting people at risk of catching the virus.

Sarah Weinrauch told CBC: ‘I feel like I’ve been extorted and falsely imprisoned under the guise of public safety and public health.’

She added she would rather take a hefty fine than be forced to stay in such conditions again.

In one horrifying incident, a woman who stayed in a Montreal quarantine hotel without a lock on her room alleged a man walked in and started to undress before sexually assaulting her.

She said she felt ‘helpless’ at the hotel and criticized the response of security, who took 20 minutes to come to her room, gave her a bottle of water she’d asked for four hours previously, told her to lock her door and then left.

Police and an ambulance eventually arrived and took her to hospital. A man was subsequently charged with sexual assault.

The woman told CTV News Montreal she blames the government for not keeping her safe even when she was obeying their rules. 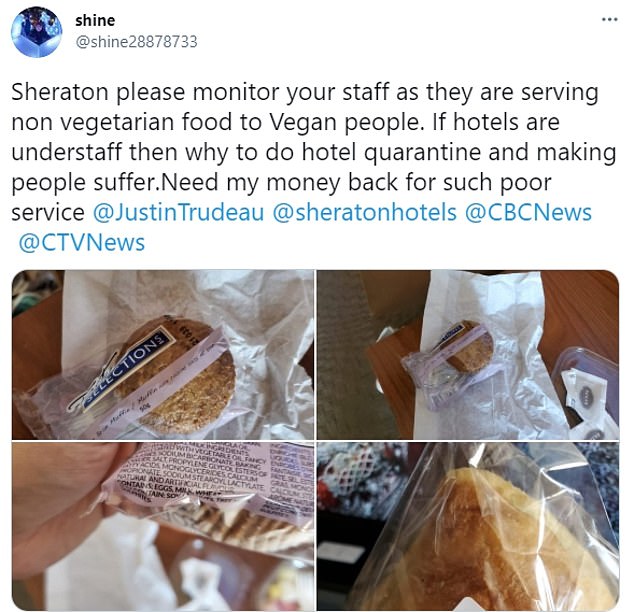 In a separate incident, a security guard hired by Canada’s federal public health agency was accused of sexual assault while carrying out a quarantine check.

The man, identified only as Hemant, carried out a compliance check in Ontario where he demanded money for a fake fine and then assaulted the woman who refused to pay, police said.

He has been arrested and charged with extortion and sexual assault.

Meanwhile a woman who went to Portugal to attend her father’s funeral blasted the quarantine system after she was forced to spend $3,458 for a one-night stay.

Cristina Teixeira told CTV News Toronto: ‘As a Canadian citizen, I can tell you this is wrong on so many levels. We’ve never experienced something like this.’

She traveled with her brother and daughter and claims she was unable to book the hotel until she arrived back in Canada. 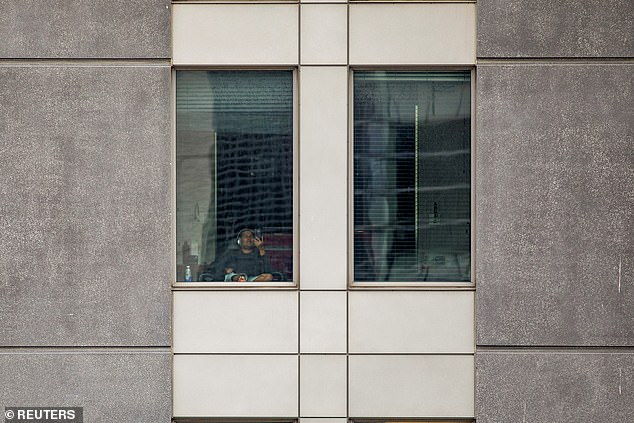 The quarantined travelers have to pay for their accommodation, food, and safety measures which the prime minister estimated would cost more than $2,000 each 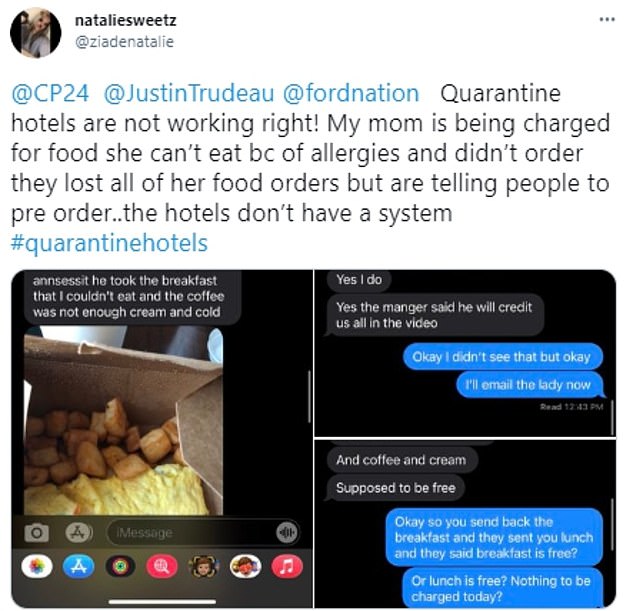 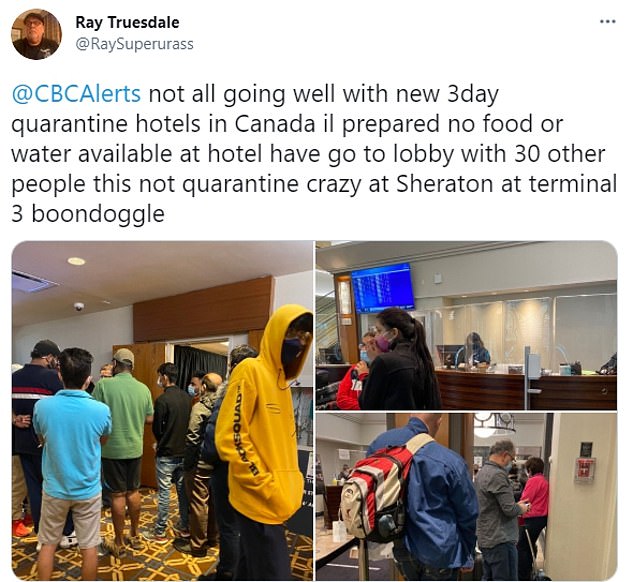 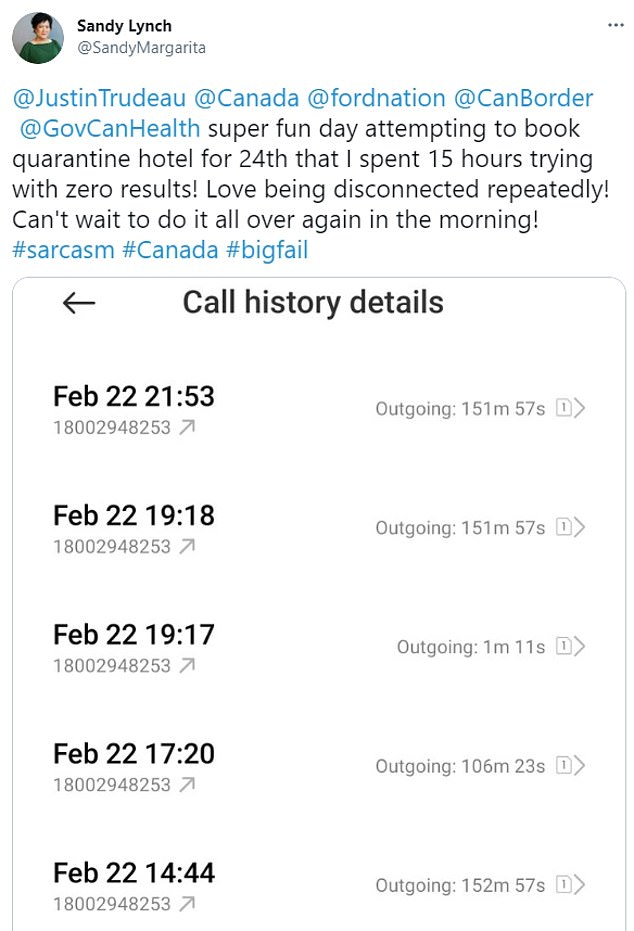 Travelers have also complained about the booking system, often waiting hours on the phone to secure a place in the rooms they are ordered to stay in

While most foreign travelers are banned from entering Canada, people with Canadian citizenship are allowed to cross the border.

Anyone entering the country has to quarantine for 14 days, which includes a mandatory three night pre-paid booking at a government-authorized hotel for people who fly in.

Travelers are expected to make their own plans and those without prearranged quarantine arrangements could be placed in a facility for 14 days or face a $3,000 for failing to book a hotel.

After the three days in a hotel, travelers must spend the remainder of quarantine in isolation with no visits from friends or family.

People must then enter daily symptom self-assessments online and government officials may make unannounced visits to check you are observing the rules.

The government has issued a list of hotels by international airports and guests have to cover costs of ‘food, room, security, transportation and infection prevention and control measures.’

Ms Teixeira was initially told over the phone the rate at the Toronto Crowne Plaza would be $369 per night for a minimum of three nights but upon arrival, the rate suddenly jumped to $769 as well as tax.

They reluctantly agreed as it was 1.30am and were then told to stay in their rooms and wait for food to be delivered at their door.

Their breakfast arrived the next morning which she said looked like ‘slop’ and shortly afterwards they all received their negative test results, meaning they could return home.

But the hotel refused to refund her for the extra two nights, leaving her with a massive bill for a one-night stay and a poor breakfast.

Mitch Beaulieu arrived in Calgary after a business trip to Florida and said he was immediately put in a black van and driven away without being told where he was being taken.

He said: ‘I get out there and there was plastic all over, people walking around in… hazmat suits… it was like jail pretty much.’

He said he was eventually told he was forced into quarantine because he didn’t take the right kind of Covid test.

Mr Beaulieu only learned where he was when he saw the building when he left.

Another dissatisfied guest said her room was filthy and unsanitized with hairs on the bedsheets, empty alcohol bottles and a dirty coffee machine.

She was also made to go down to lobby to pick up her food, defeating the whole purpose of the quarantine.

One guest who stayed in Toronto saw a crowd of guests descend on the hotel lobby to demand better service and food.

Raymond Truesdale said the exhausted travelers were waiting for hours to receive water or a hot meal.

He said: ‘It was a boondoggle. Pandemonium. You could see people really frustrated and I don’t blame them.’

People gathered together in an elevator and in the hotel lobby in cramped conditions despite the quarantine period.

Mr Truesdale also balked at having to pay $47.23 for a bowl of chili, rice, salad, and a Diet Pepsi, branding the meal ‘criminal’.

Arunthia Urmi, who stayed at a Holiday Inn in Toronto, said her meal arrived late at night and came without any utensils.

Travelers have also complained about the booking system, often waiting hours on the phone to secure a place in the rooms they are ordered to stay in. 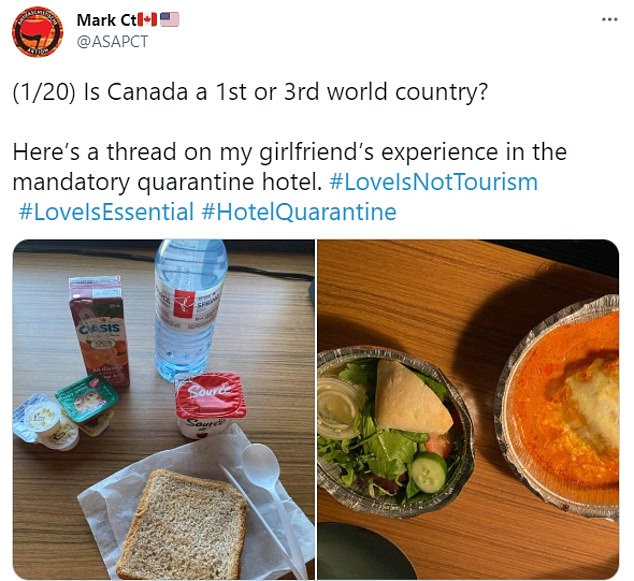 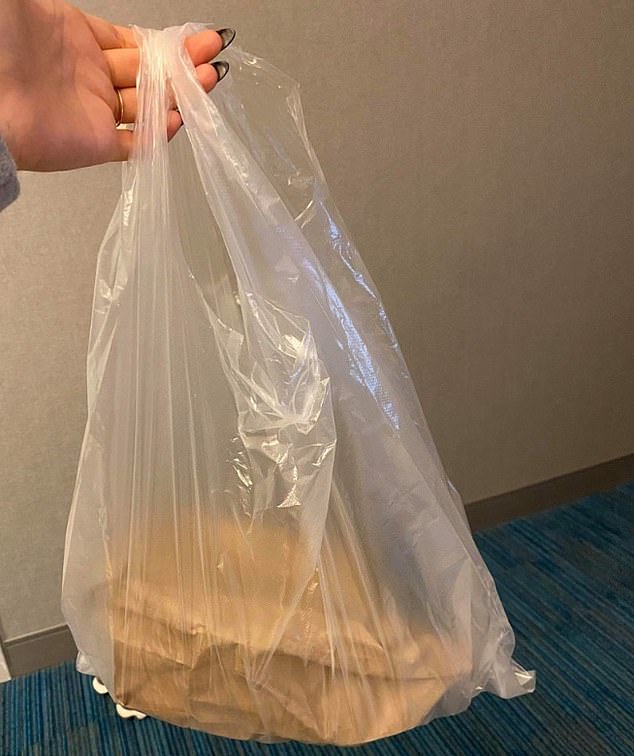 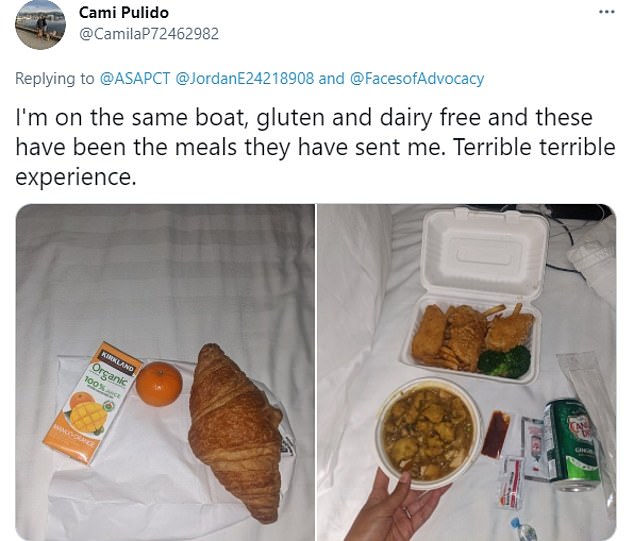 Others, such as Eileen MacKinnon said they did not receive the food they paid for and she was made to order in takeaway.

She was told at check-in that $125 of her daily rate would go towards food, only to be told later the hotel was out of meals and drinks. She said she didn’t receive a refund.

Guests have also complained that they can’t eat the food being delivered because of allergies but are not given an alternative and cannot leave their room.

Canada’s House of Common’s Federal Public Safety Committee said it would carry out a study into the safety and security of the quarantine hotels.

The harsh measures come amid fears of a third wave of Covid in Canada after a recent uptick in infections.

On Wednesday, Alberta saw its highest number of new cases in 11 weeks while Quebec forced a number of cities into lockdown. 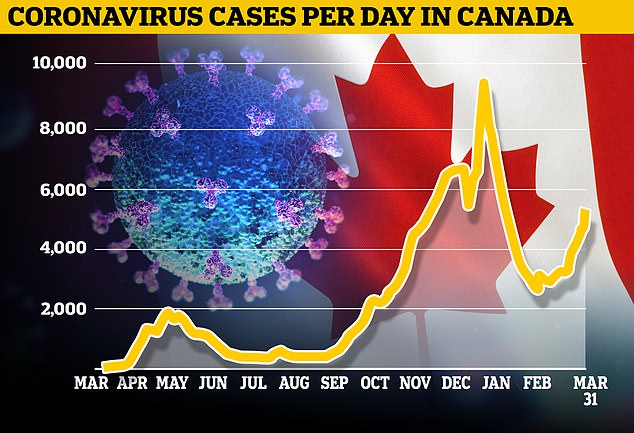 Across the country there have been 37,370 recorded cases in the past seven days with 221 deaths.

A representative from Health Canada and Public Agency of Canada Media Relations said: ‘Canada’s hotel community is actively supporting the Government of Canada’s mandatory quarantine requirements and the Public Health Agency of Canada is in daily contact with hotels to support their needs.’

The Hotel Association of Canada told CTV News every hotel is managed individually, adding: ‘The health and safety of guests and staff is our top priority. We will continue to implement the advice of public health experts including the best practices provided by PHAC for those specific hotels.

‘The cost of each stay will vary between hotels, with additional fees for meals, augmented security, supervised movement to outdoor areas, designated transportation, and additional infection control measures.’