An unruly heckler who was kicked out of Rafael Nadal’s second-round match after abusing the Spaniard has doubled down on her rant – calling the tennis star ‘boring’.

Nadal was up 5-4 in the second set against American Michael Mmoh on Thursday night when he was heckled by the female fan who hurled insults at him and then flipped him the bird.

A surprised Nadal then appeared to poke fun at her as he laughed and pointed at himself asking ‘me?’

The bizarre exchange was reportedly sparked when the woman yelled at him ‘hurry up you OCD f**k’.

Defending herself on Friday morning, the Sydney woman said she found Nadal ‘incredibly boring’ and said security were rude to her when they removed her from the arena. 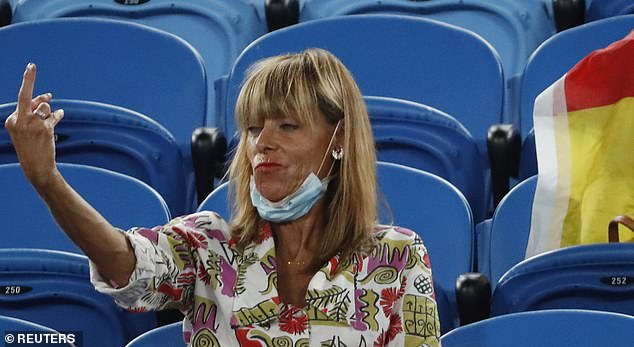 ‘I just called out, “Get over your OCD rituals” and that’s when I flicked him the bird,’ she said.

‘The fact pictures of me have gone viral around the world reflects how incredibly boring his matches are. Why would you focus on a spectator?’

The fan – who did not give her name – said she was a ‘tennis aficionado’ who comes to Melbourne each year to watch the Australian Open.

She admitted though her daughter was less than impressed with her rant.

‘My daughter wasnt too happy because I’m so embarrassing.’ 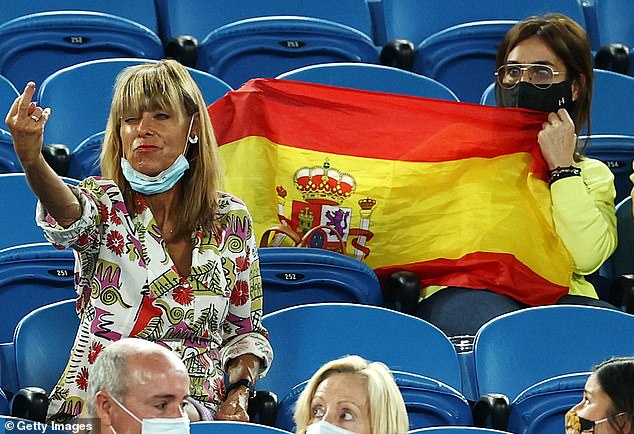 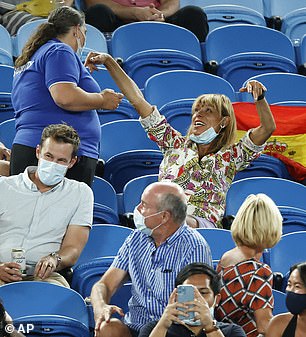 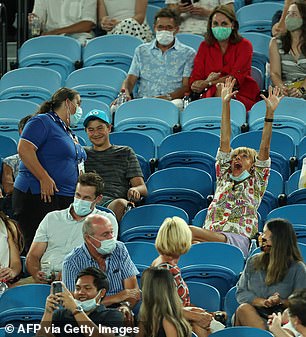 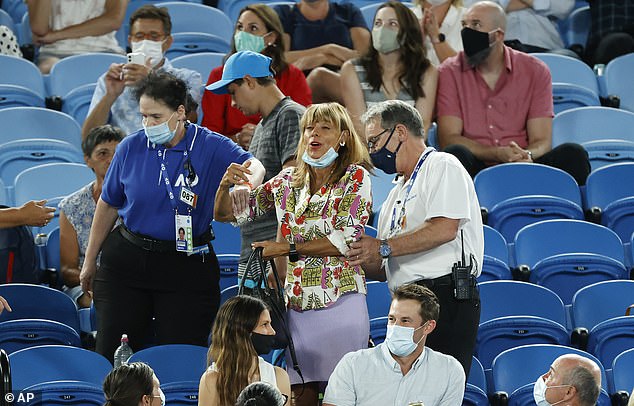 She said she only watched the match because she had bought tickets for the previous women’s game between Coco Gauff and Elina Svitolina.

TV footage of the game showed the fan being led from the stands by Australian Open staff while Nadal watched on bemused.

‘Thank you madam, you are delaying everyone,’ the chair umpire interjected during her wild rant. 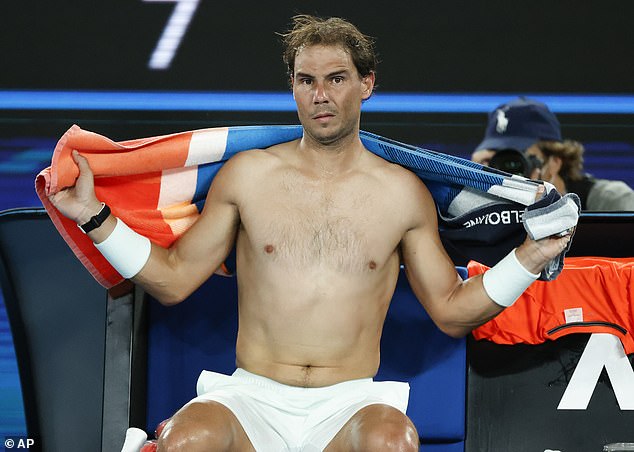 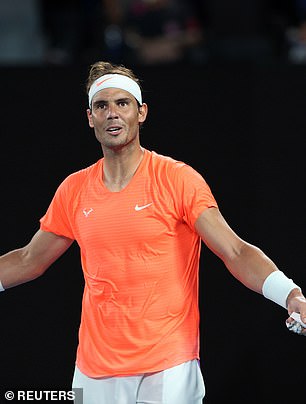 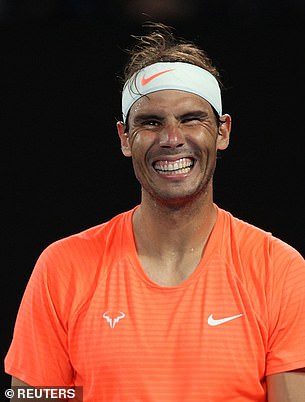 ‘A little bit of a disturbance there in the crowd,’ Australian tennis great and commentator John Fitzgerald told Channel Nine viewers.

‘I couldn’t hear the specific language, there was a little bit of ill will between two ladies.

‘Well there is one lady that is getting rather animated, she might be asked to leave, actually. I think she’s having a crack at Rafa, I’m not sure why, she’s the first person I’ve seen do that.

‘She’s a bit inebriated I think, this is chaos. This is so unnecessary, it’s just one individual that has made a complete goose out of themselves.’

Nadal progressed to the third round in straight sets and his quest for a 21st grand slam title continued. 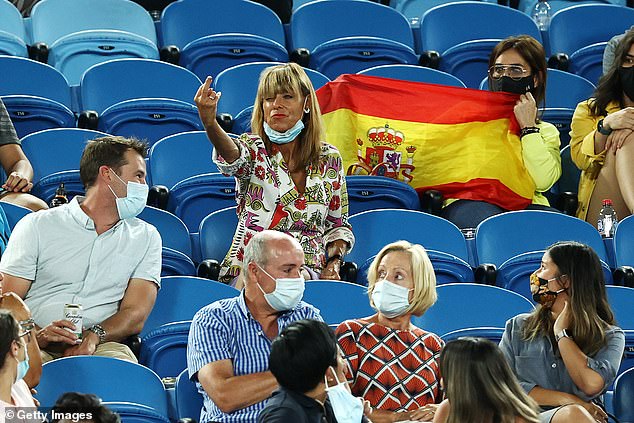 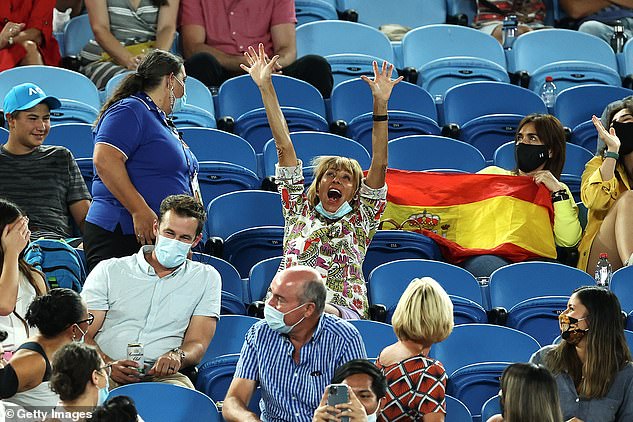 The unruly fan was in high spirits as she wildly waved her hands in the air, attracting the attention of venue security who escorted her out of the venue 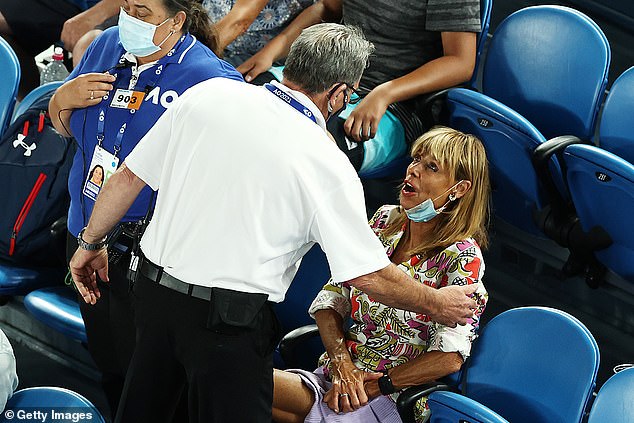 The crowd booed at the unruly fan before she was booted from the area, much to her angst

He gave a blunt response when he was asked about the bizarre encounter during his post-match interview on court.

‘Now there was someone in the crowd, you didn’t know her, did you?’ he was asked.

Nadal replied: ‘No, and honestly, I don’t want to know.’

He later expanded on the incident, smiling: ‘Maybe she took too much gin or tequila. I don’t know. But honestly it was strange situation, but funny at the same time.

‘Somebody doing the finger to me – I don’t know the reason. I was surprised, yes, but at the same time was thinking, “poor girl”. Because probably she was drunk or something like this. I don’t know.’

Slovenia star Kaja Juvan is also through to the third round, despite vomiting several times during an 3-6 7-6(2) 6-3 nailbiter against Egypt’s Mayar Sherif.

The stifling evening heat got to world No.104 Juvan, who was seen twice bending down and being sick next to her bench during the match. 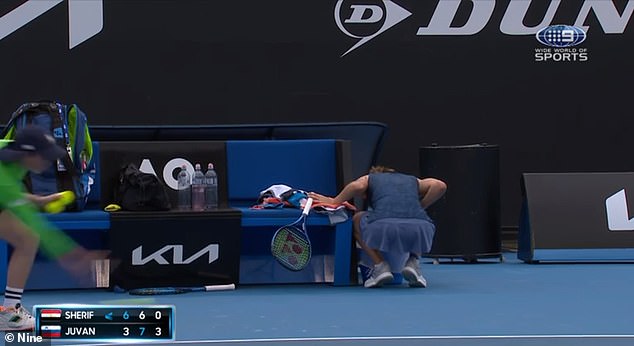 The stifling evening heat got to world No.104 Kaja Juvan, who was seen twice bending down and being sick next to her bench during the match 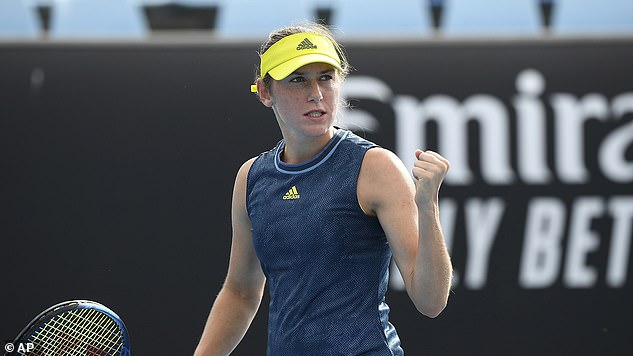 ‘Well this is tough to watch, beg your pardon, getting sick on the court,’ commentator Nick McCarvel said when Juvan first threw up.

‘Kaja Juvan obviously trying to keep herself physically going, trying to rehydrate. On the last point, she fought so hard and then collapsed to her knees.’

The match ended with both players in distress as the victorious Juvan fell to her knees before rushing back to her bench to vomit for a third time.

The showdown that almost lasted three hours was the second-longest women’s contest in the first four days of the Australian Open.

Meanwhile, an enthralling five set marathon between two Italian players was overshadowed by their fiery post-match confrontation that almost led to a fistfight.

World No.16 Fabio Fognini and countryman Salvatore Caruso had to be physically separated by match officials after their thrilling five set epic.

The drama unfolded on the court moments after the match as they came face to face at the net on John Cain Arena. 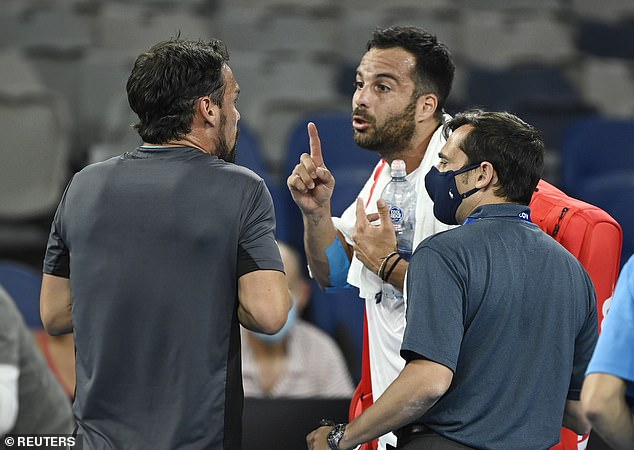 Fabio Fognini (left) and Salvatore Caruso (right) had to be separated by a match official following their Australian Open showdown.

The pair exchanged a brief handshake before things quickly erupted into an angry war of words over the net.

The shouting match continued for several minutes after the pair returned to their benches.

The feuding pair continued to rant at each other in Italian as they wagged their fingers and gestured angrily at each other.

The pair were eventually separated by the supervisor as Caruso collected his gear and left the court as tensions threatened to boil over.

The ugly scenes were sparked by Fognini, who felt that his opponent ‘got lucky’. 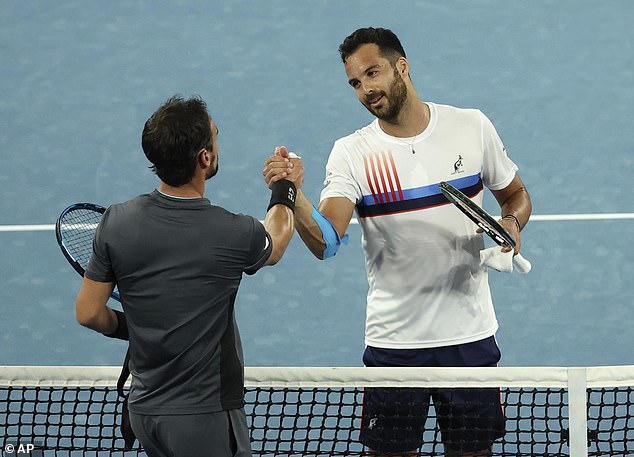 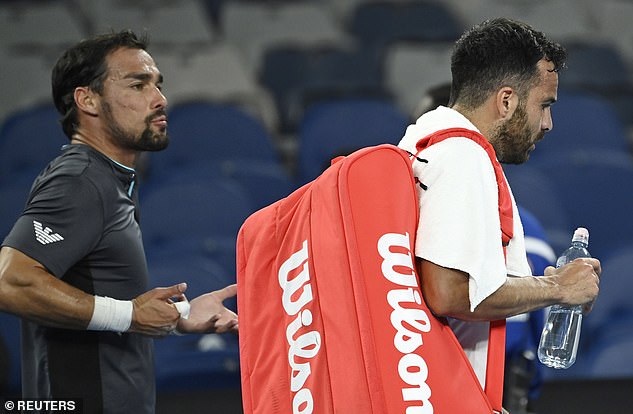 ‘You have been f**king lucky, you should apologise, I didn’t disrespect you until now,’ a furious Fognini confronted his opponent.

A bewildered Caruso objected to his opponent’s accusations.

‘What are you talking about? I never said a word during all the match’ he said.

Fognini fired back: So why are you breaking my balls now? I said you have been lucky, if I’m wrong saying it, I’m wrong. Don’t attack me.

Caruso replied:  ‘I didn’t attack you. I’m telling you it’s not the way to behave because I didn’t tell you a single world. Let’s say I didn’t expect that from you.’

Fognini was tight-lipped on the incident afterwards where he refused to comment on the drama.

‘We are good friends, and you know me better than the things that happened on court, for me stay on court. I have nothing to say about that question anymore,’ he later told reporters.

What was said between the Italian pair in angry confrontation

Fognini: You have been f**king lucky, you should apologise, I didn’t disrespect you until now.

Caruso: What are you talking about?

Caruso: What are you talking about?

Fognini: Can’t I say you have been lucky?

Caruso: I didn’t dare to say a single world in the whole match.

Fognini: I said something because you called for it.

Caruso: I didn’t dare to say a single world in the whole match, enough now.

Fognini: Can’t I say you have been lucky? What’s the problem?

Caruso: You can do whatever you want.

Fognini: So why are you breaking my balls now? I said you have been lucky, if I’m wrong saying it, I’m wrong. Don’t attack me.

Caruso: I didn’t attack you. I’m telling you it’s not the way to behave because I didn’t tell you a single world. Let’s say I didn’t expect that from you.

Fognini: What did you not expect? I told you you have been lucky, you didn’t like it, what should I say?

Caruso: It’s not the way to do it.

Fognini: Why? What’s the problem? 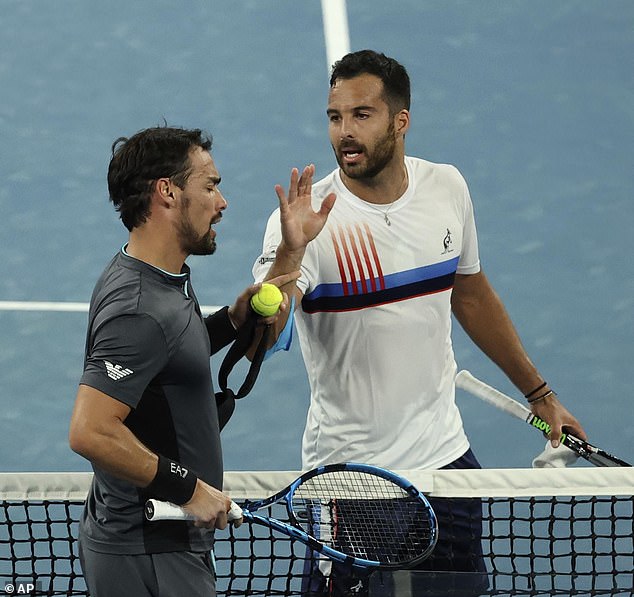 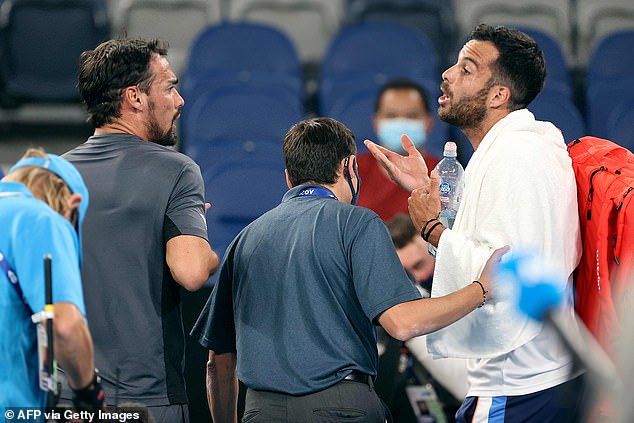 It’s not the first time Fognini has been embroiled in controversy at the Australian Open.

Fognini ripped his shirt off in protest and was docked a point for refusing to play during an ill-tempered fourth round loss to Tenys Sandgren that the American described as a ‘war’ at last year’s grand slam.

Sparks flew after Fognini protested a foot-fault call and stormed off court for seven minutes.

Sandgren accused the umpire of lacking the courage to penalise Fognini, who was then docked a point penalty for refusing to play after being broken in his first service game of the second set.

Fognini, complaining of blisters, ripped off his shirt and protested about that call to no avail before going down 4-0.

The Italian won the next five games as the opponents continued to snipe at each other across the net. 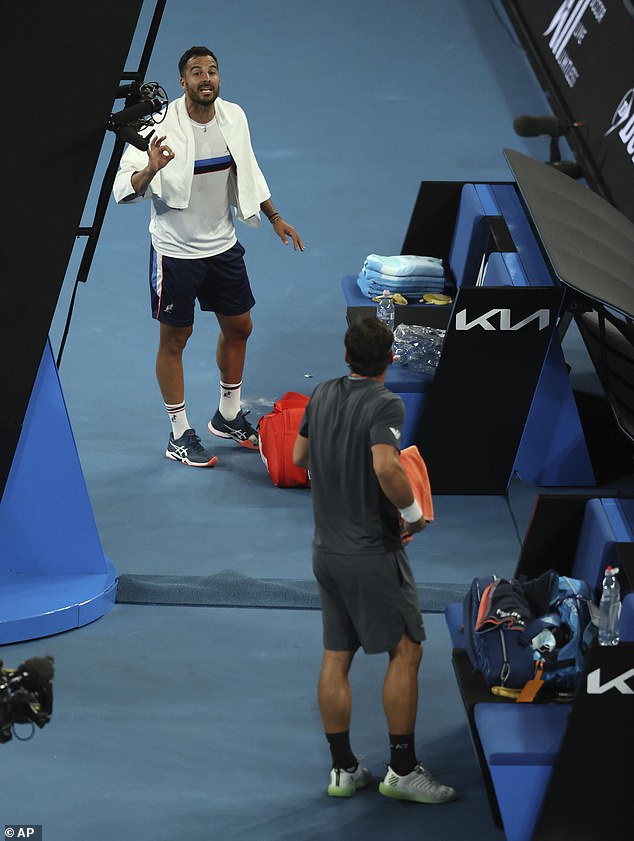