Mark Zuckerberg and Dropbox CEO Have Been ‘Close Friends’ For Years. Here Are 7 Other Top Tech Exec Friendships.

What do all these high-profile pairings have in common? They’re all close friendships within the world of tech.

Silicon Valley may be known for its competitive spirit, but it’s also fostered several years-long friendships among some of its most famous executives. Microsoft cofounder Bill Gates and investor Warren Buffett, for example, have been buddies for nearly 30 years. And Larry Ellison and Marc Benioff have been friends for decades, even though their respective enterprise software companies are technically rivals.

Here’s a closer look at some of the friendships among tech CEOs. 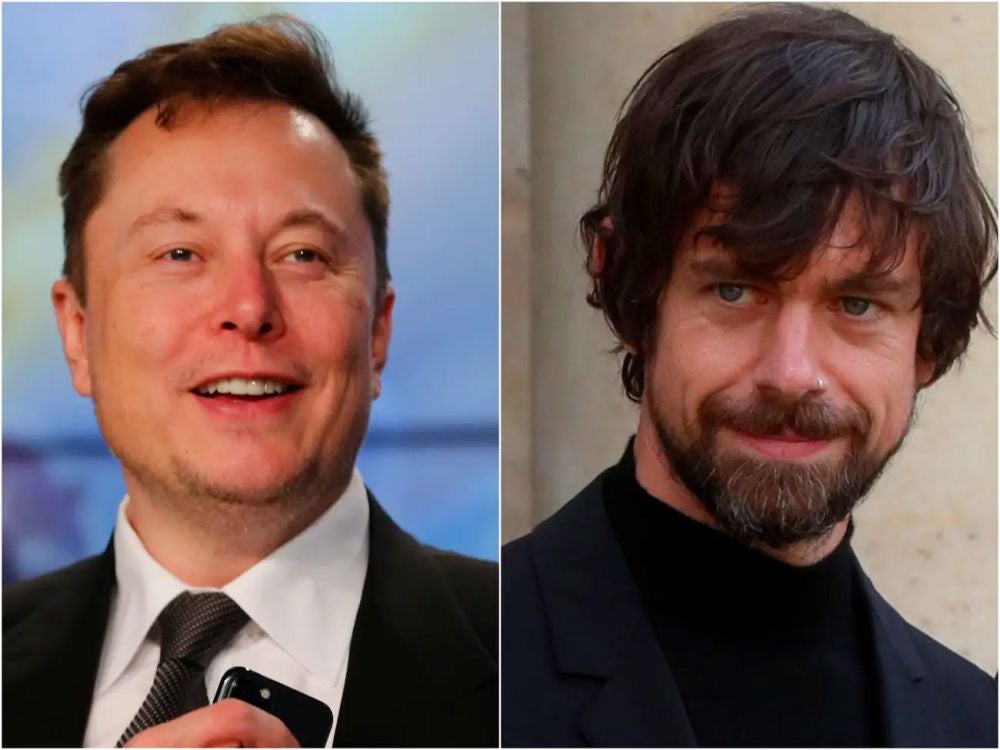 While it’s not clear if Tesla and SpaceX CEO Elon Musk and Twitter and Square CEO Jack Dorsey actually hang out in real life, they do seem to have a solid virtual friendship.

As far back as 2016, Dorsey said Musk was “a really good model” for how to use Twitter. More recently, Dorsey said in an interview that Musk is his favorite Twitter follow, to which Musk responded, “Thanks Jack, Twitter rocks!”

Then, in January, Dorsey and Musk spoke over video chat in front of Twitter employees and Musk gave Dorsey advice on how to improve the platform.

In March, as Dorsey faces a possible ouster at the hands of an activist hedge fund, Musk publicly tweeted his support of the CEO. 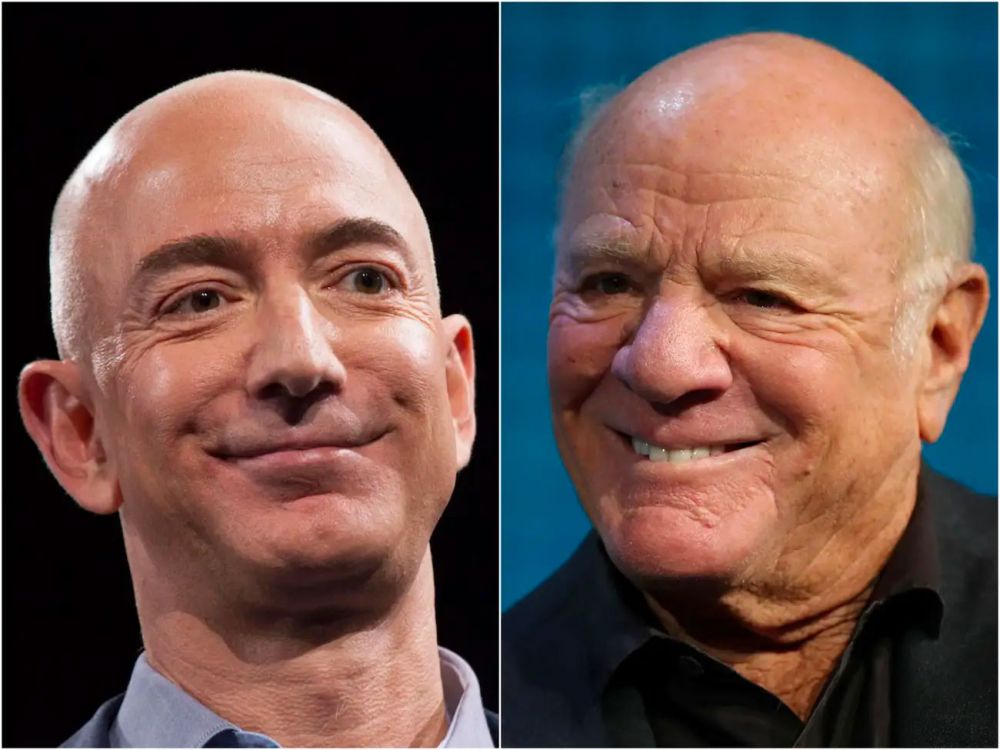 Amazon CEO Jeff Bezos and IAC Chairman Barry Diller appear to have been friends for years.

In January 2016, Diller correctly predicted that Bezos would become the richest person in the world.

And in the last few years, as Bezos has gone through changes in his personal life, he’s been spotted hanging out with Diller and his wife, designer Diane von Furstenberg, more often. Diller and von Furstenberg have reportedly attended multiple parties hosted by Bezos, and Bezos and his girlfriend, Lauren Sanchez, have sailed aboard von Furstenberg’s yacht. The two couples were also reportedly spotted exploring Venice together. 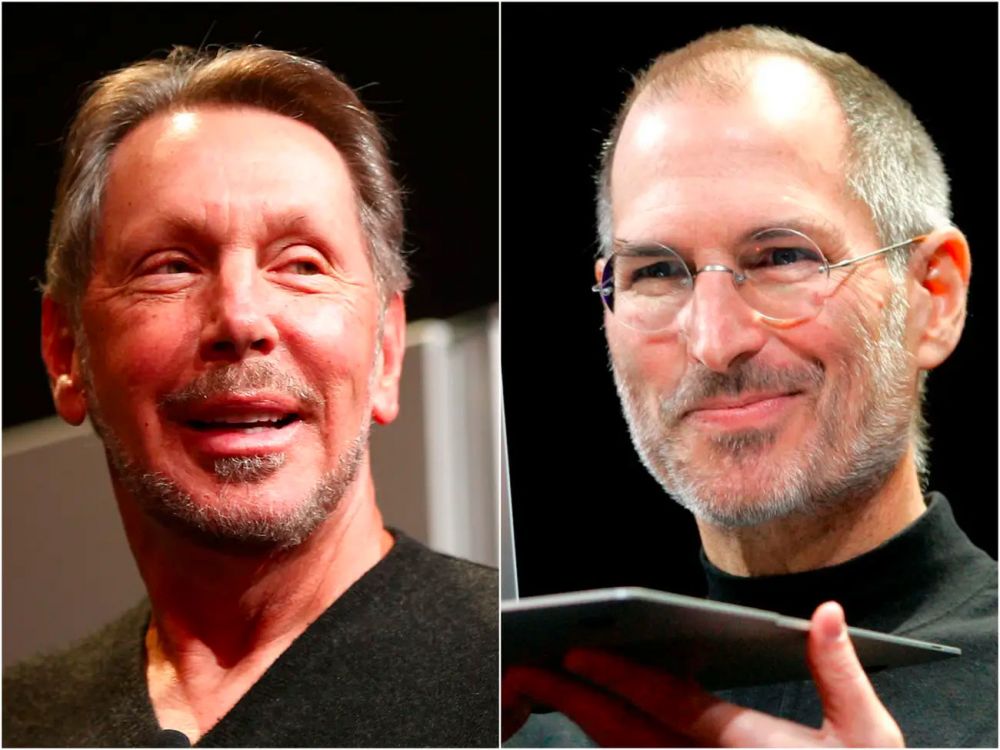 Ellison and Jobs used to be neighbors in Woodside, California, and the pair often went hiking together. It was during one of those hikes that Ellison helped Jobs plot how to regain control of Apple after he was ousted — Ellison even suggested buying Apple himself and installing Jobs as CEO.

It was Jobs who came up with the idea that Apple should acquire his company, Next, instead. When Ellison questioned how the pair would make money, Jobs said to him, “Larry, this is why it’s so important that I’m your friend. You don’t need any more money,” Ellison said in a commencement speech in 2016.

Ellison said he spent time with Jobs in his final days, taking shorter walks around the block with him as he became weaker. Ellison gave a eulogy at Jobs’ funeral. 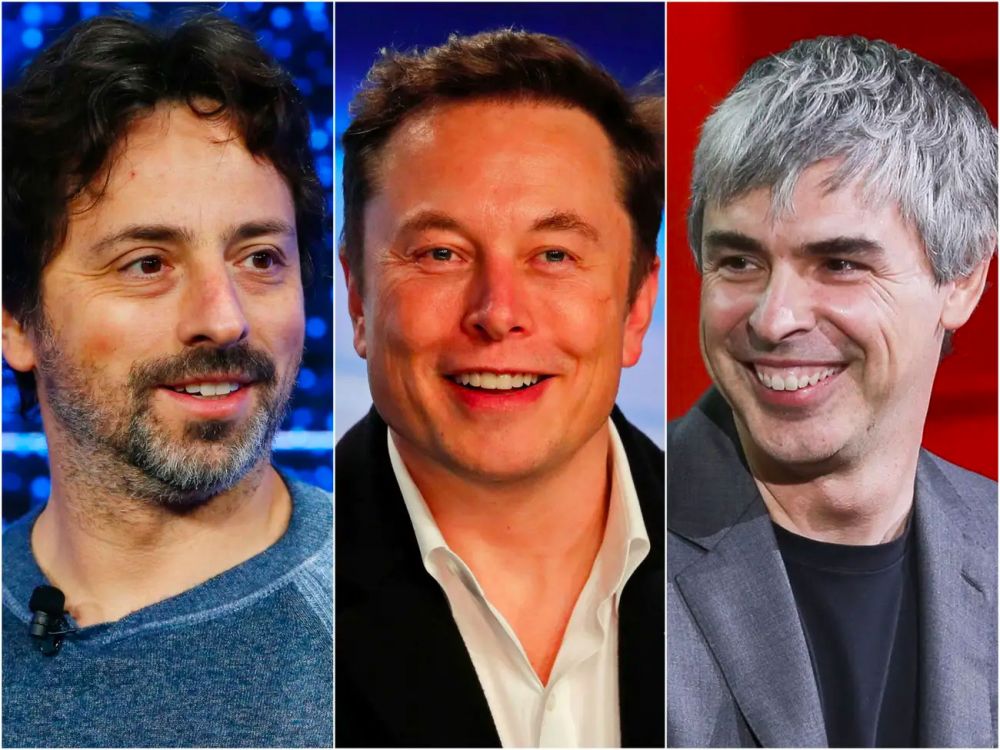 Elon Musk has been friends with the cofounders of Google for a long time.

In the early days of Musk’s tenure at the electric car maker, he took Brin and Page on a test drive. Unfortunately, a software bug prevented the car from going any faster than 10 miles per hour, Musk recounted at a company shareholder meeting in 2016. Despite “the world’s worst demo,” however, the duo ended up investing in Tesla anyway, Musk said.

Over the years, Musk and Page especially have become close friends — Musk even sometimes sleeps at Page’s house when he’s in town, and Page once said he’d rather leave his money to Musk than give it away to charity.

Brin, Page, and Musk also reportedly used to hang out in a Google-owned apartment and brainstorm ideas.

“It’s fun for the three of us [including Google cofounder Sergey Brin] to talk about kind of crazy things, and we find stuff that eventually turns out to be real,” Page told Ashlee Vance, who wrote a 2015 biography about Musk. 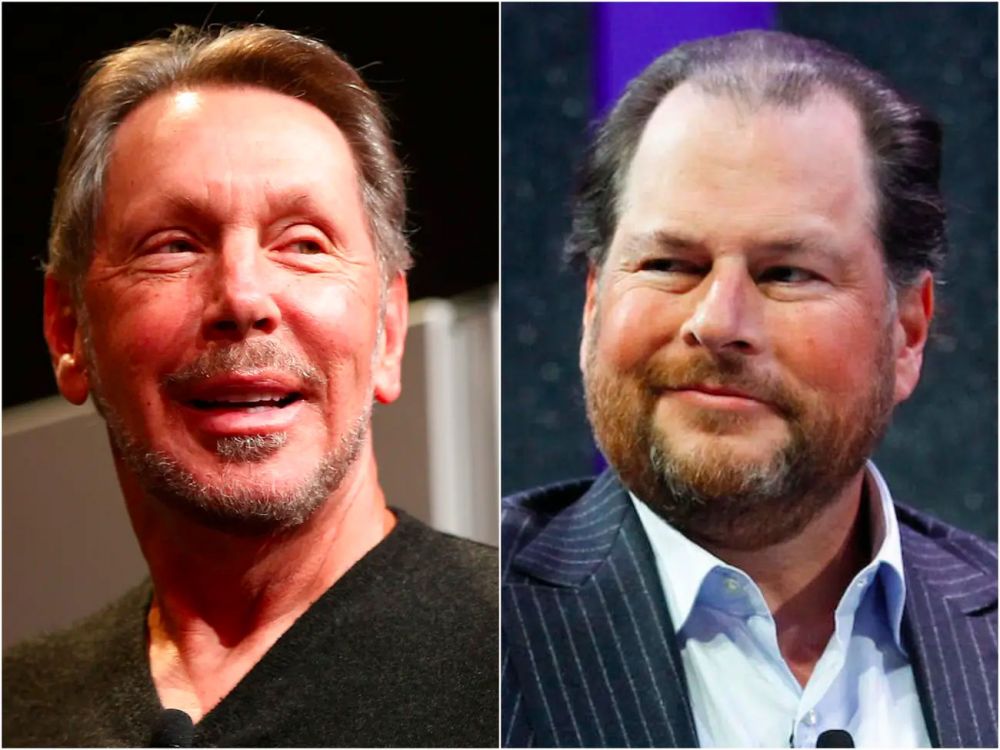 Ellison and Salesforce CEO Marc Benioff met when Benioff began working at Oracle when he was 23. He was a star early on, earning a “rookie of the year” award that same year and becoming Oracle’s youngest VP by age 26. He spent 13 years at Oracle, during which he became a trusted lieutenant to Ellison.

The pair became such close friends that rumors swirled about their relationship’s backstory — people wondered if they were related, or if Ellison had been Benioff’s childhood babysitter. Ellison and Benioff took trips together, sailed on Ellison’s yacht, and went on double dates.

Benioff began working on Salesforce with Ellison’s blessing, and Ellison became an investor, putting in $2 million early on.

The duo has publicly feuded over the years — including when Benioff fired Ellison from Salesforce’s board — but Benioff has also described Ellison as his mentor.

“There is no one I’ve learned more from than Larry Ellison,” Benioff said in 2013. 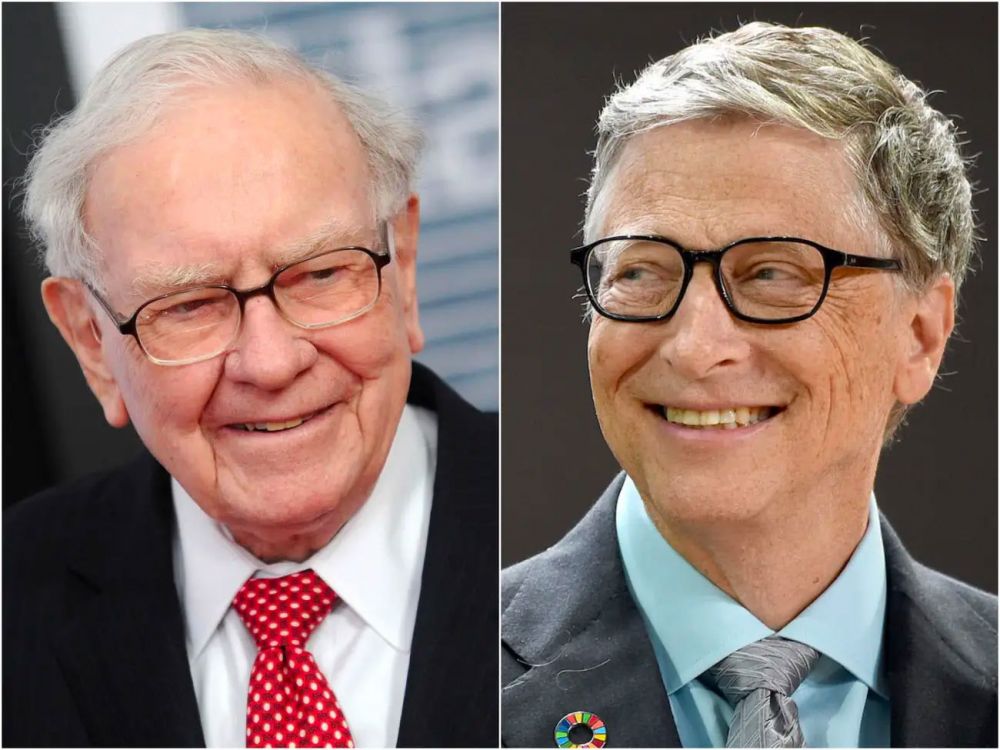 Berkshire Hathaway CEO Warren Buffett and Microsoft cofounder Bill Gates met in 1991 when Buffett was invited over to Gates’ mother’s house. Neither man was very interested in meeting the other, but they ended up hitting it off. Soon after, Gates asked Buffett for a business book recommendation, and Buffett loaned him his copy of “Business Adventures” by John Brookes — Gates still has it today.

Since then, the duo has done everything from play table tennis together to participate in Berkshire Hathaway’s annual newspaper toss competition. And Gates, his wife Melinda, and Buffett launched the Giving Pledge together in 2010, vowing to give away the majority of their wealth in their lifetimes or in their wills.

While Buffett owns a major stake in Apple, he’s said that he’ll never invest in Microsoft due to his friendship with Gates. 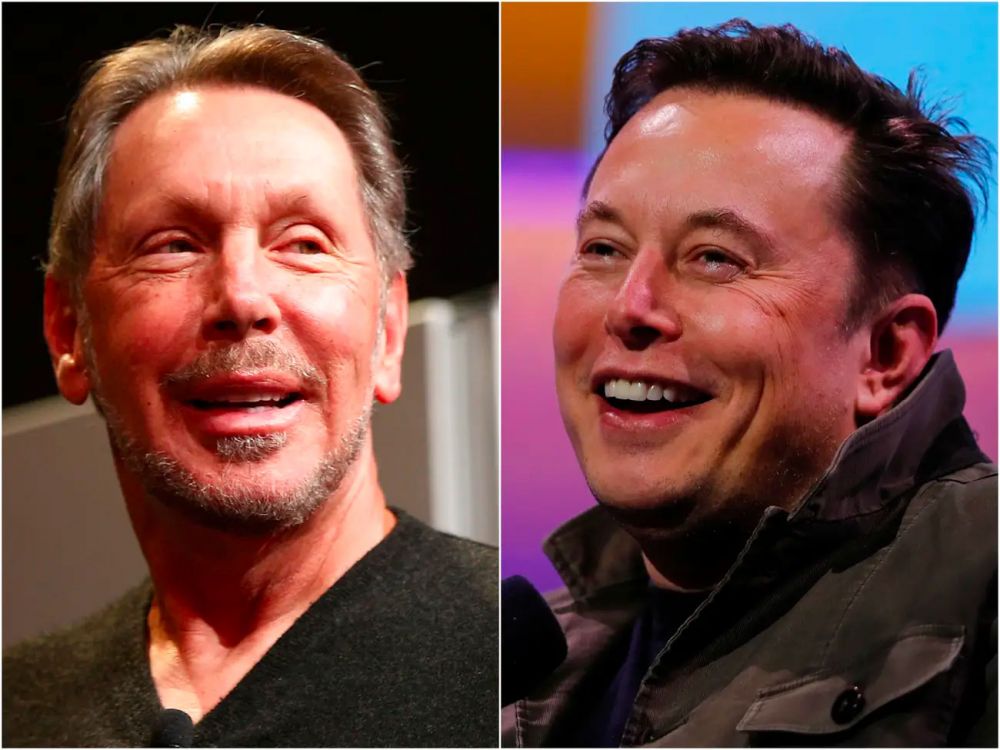 Ellison and Musk appear to be two of the friendliest CEOs in tech, if their relationships with Benioff and Jobs, and Page, Brin, and Dorsey are any indication. So it’s not much of a surprise that the two moguls are “very close” friends with each other, too.

Back in 2018, when Ellison was named to Tesla’s board of directions, he highlighted his relationship with Musk.

“I think Tesla has a lot of upside,” Ellison said at the time. “I am not sure how many people know, but I’m very close friends with Elon Musk, and I’m a big investor in Tesla.”

It makes sense that Ellison and Musk would get along well, as they’re two of the most colorful personalities in tech. Ellison owns an entire $300 million island in Hawaii, likes to race yachts, and doesn’t mind trash-talking his competitors. Musk spends his money on rare cars, has had multiple high-profile relationships, and is often outspoken on Twitter. 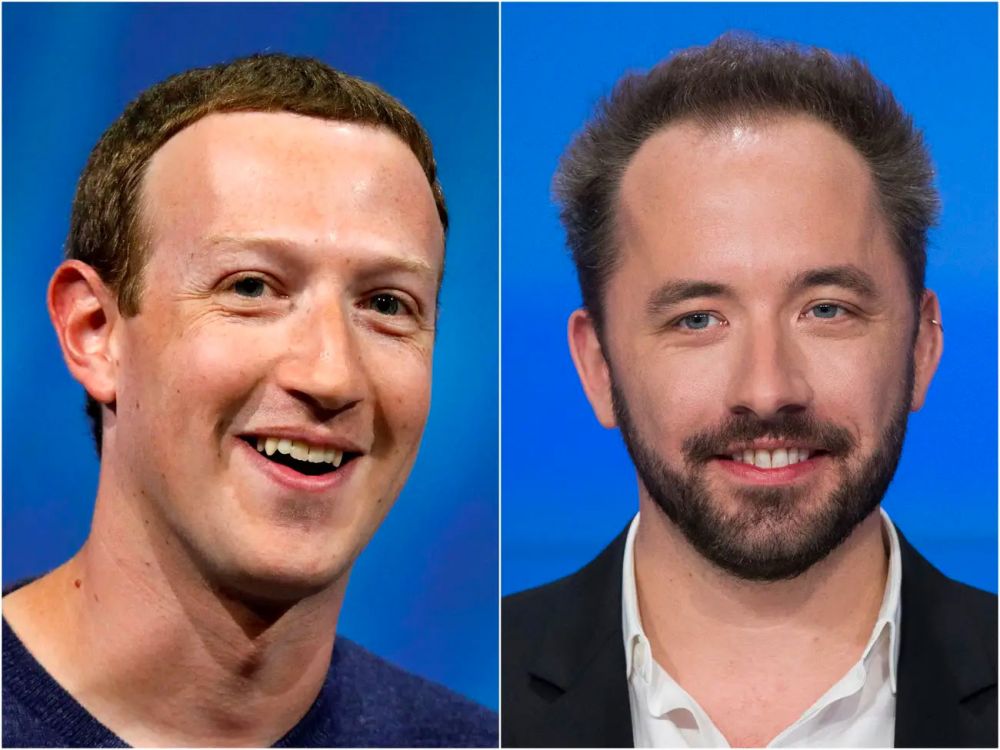 Dropbox CEO Drew Houston and Facebook CEO Mark Zuckerberg have apparently been friends for years, with the former often turning to the latter for advice.

“[Zuckerberg’s] given me a lot of advice just on company scaling, how do you organize people, how do you set up these systems,” Houston told Bloomberg in 2015.

That same year, a Fast Company profile on Dropbox described Houston as a “close friend” of Zuckerberg’s. The pair has been photographed together everywhere from Houston’s birthday party at a ping-pong club to the prestigious Allen & Co. conference in Sun Valley, Idaho.

This past February, Houston was appointed to Facebook’s board of directors.

“Drew brings valuable perspective to our board as a leader of a technology company with services used by millions of people and businesses,” Zuckerberg said in a statement at the time. “He thinks deeply about where technology is going and how to build a culture that delivers services that always work well.”