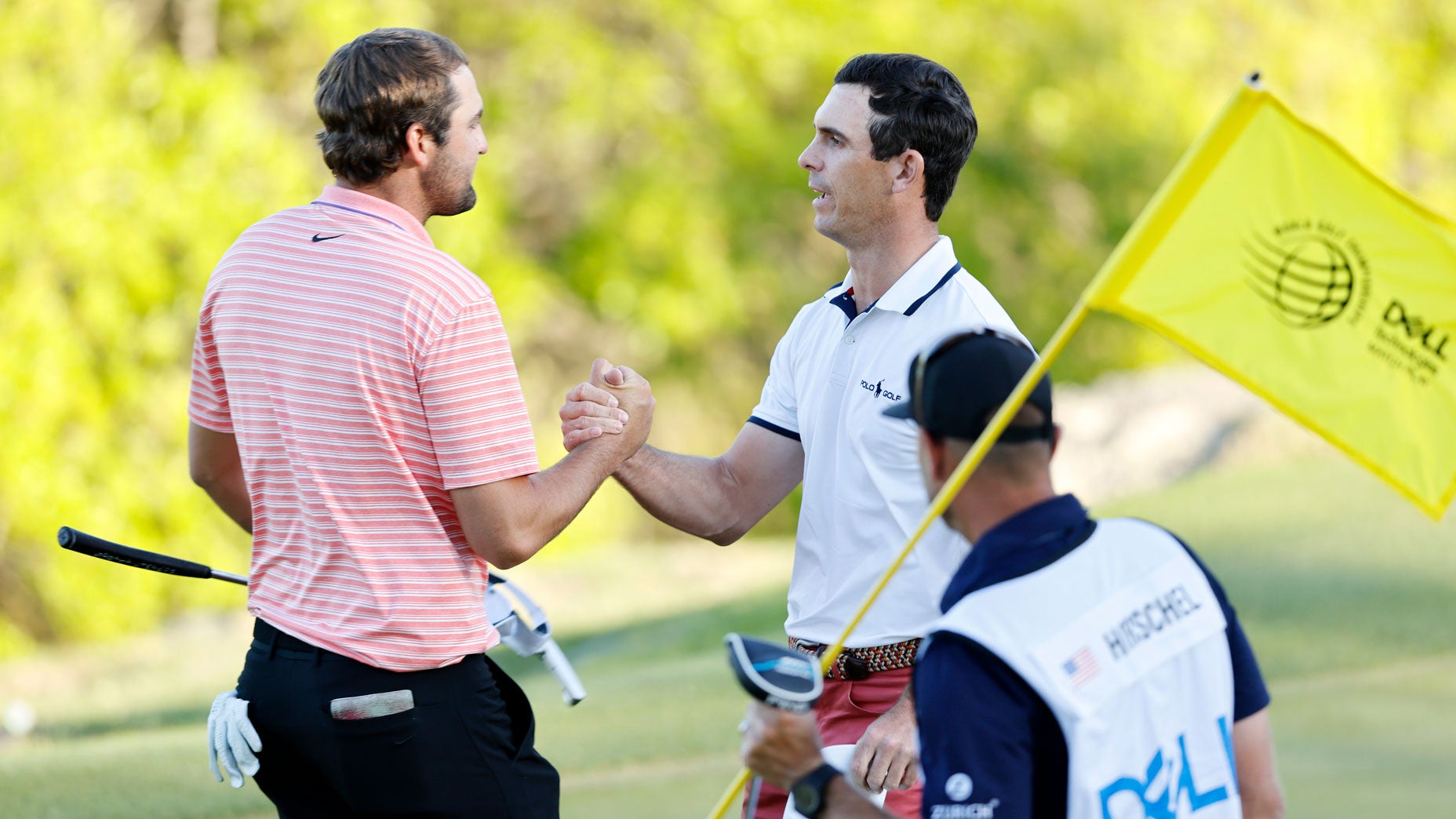 Scottie Scheffler and Billy Horschel after Horschel’s victory on Sunday in the WGC-Match Play.

1. The WGC-Dell Technologies Match Play concluded Sunday, with Billy Horschel beating Scottie Scheffler 2 and 1 in the final. The event’s format, as ever, delivered all kinds of drama and intrigue. What was the biggest insight or surprise you gleaned from watching the world’s best players squaring off in five days of head-to-head matches?

Sean Zak, senior editor (@sean_zak): That Sergio is getting dialed. He may not have advanced to the final four, but he played a lot of clutch golf, and he’s starting to peak ahead of Augusta. Who else is peaking right now? It’s hard to look around and pick out more than a couple guys who are really looking great. The Masters starts in 11 days.

Josh Sens, senior writer (@JoshSens): You mean, aside from the fact that Matt Kuchar is going to win the Masters? It was a reminder that for all the effort organizers put into trying to produce desired results, the quirks and unpredictability of match play make that impossible. And that’s the beauty of it. Best to just sit back and enjoy.

Dylan Dethier, senior writer (@dylan_dethier): This week was a terrific reminder that match play is a delightful crapshoot. Most of the top seeds didn’t make it through match play. The final four was comprised of the 30, 31, 32 and 52 seeds. That’s like a bunch of eight seeds and a 13 making it to the finale of March Madness. These guys are [all] good!

James Colgan, assistant editor (@jamescolgan26): My goodness, I miss the Ryder Cup. If the DJ-Na dust-up wasn’t enough to stir your imagination toward similar match play drama at Whistling in September, you might not have a pulse. (P.S. — this Scottie Scheffler fellow might make for an interesting addition to Steve Stricker’s team come September.)

2. Ian Poulter was among several players who said he’d rather see a single-elimination format in the first round of the Match Play, as opposed to the round-robin group format the tournament has used since 2015. (The Tour moved to groups to prevent superstars from being eliminated after one match.) Poulter said it’s a bit “annoying” that you can beat the eventual winner in a first-round match, as Poulter did in 2019, when he beat eventual champ Kevin Kisner in the first round. Poulter also said “there’s a couple of scenarios that can happen in these group matches which, if you’re in a position where you can’t advance, are you really trying really hard? Not really sure.” Is there a format solution that would address both Poulter’s and the Tour’s concerns?

Zak: I’m probably in the minority, but I think the current format is great. You wanna advance, play better! Don’t lose the match you need to win. I guess a hybrid model that allows for a wild card or two advancing without winning their group might make sense. But Billy Horschel and Scottie Scheffler played upwards of 115 holes this week. Do we need to add more to that?

Sens: As with the golf swing, it’s easy to start over-thinking this one. You can’t always legislate for desired outcomes, which was part of the motivation for moving away from single elimination in the first place: trying to protect the biggest stars from being knocked out early by fluke losses. I’m with Poulter here. Keep it simple. Make it single elimination. More excitement throughout.

Dethier: I like the current format because Wednesday through Saturday are all immensely fun golf-watching days (Sunday’s finale really relies on compelling characters to make it great). I understand the players’ gripes, because it can feel like you have to win three matches just to make it out of pool play — but as a viewer, I’m starved for more professional match play golf. Why limit that?!

Colgan: Ah yes, I’ve always enjoyed the NFL’s group-stage playoff format. Sudden death is such a sudden way for one’s tournament hopes to die — which is precisely why we’ve all filled out our brackets for the round-robin NCAA tournament, in which the 16 seeds play the one seeds four times each to determine supremacy. In all seriousness, let’s stop overthinking this one. Leave pool play to soccer and give the fans what they want: drama.

3. In a classic bit of match-play awkwardness at the WGC, Dustin Johnson picked up a short putt in his match against Kevin Na before Na had conceded it; Johnson said he thought he’d heard Na give him the putt, but Na hadn’t. Na ultimately gave Johnson the putt anyway but was only permitted to do so because of what Johnson thought he had heard. In situations like this one — when a player’s opponent agrees that he/she would have conceded a putt — should the rules allow for retroactive concessions?

Zak: Oh, yeah. Why not? We ran into this silly issue with Sergio Garcia and Matt Kuchar a couple years ago and the awkward application of the Rules eventually found them delivering an apology explanation together. One galaxy brain take (first heard from the gang at No Laying Up) is that each cup should have a circle spray-painted around it. You get it inside 24 inches, it’s good. Move on.

Sens: What Sean said, exactly. Except for the 24-inch spray-paint circle idea, which is obviously ridiculous.

Dethier: Yeah, I like having some common sense apply here. Kevin Na has caught plenty of grief for calling out DJ, but it’s clear from talking to other golfers that his objection was well-founded — it was just the manner in which their conversation occurred that made the entire thing uncomfortable. One of the weird joys of match play, though.

Colgan: If Zak can find a single course superintendent who is willing to cover their meticulously manicured greens with spray paint, I’ll sign up for the 24-inch circle. Until then, change the rule. So long as both players agree, what’s the harm in a retroactive concession?

4. The Pete Dye design at Austin Country Club has established itself as a stellar match-play venue with a mix of risk-reward holes that require players to strategize. What other course would you like to see the Match Play visit?

Zak: Whistling Straits 😉 ACC is truly a great match play course, all the way up to the final hole. Let’s not ruin a good thing, but if we must, we shall get bold. Gimme the annual Match Play at Chambers Bay.

Sens: Hard to find a better do-or-die course than another Dye design: Kiawah is tailor-made for match play. And we don’t get to see nearly enough of that place.

Dethier: I obviously agree with Zak’s Chambers take. Bandon Dunes was also a terrific U.S. Am host and would be a blast to watch the pros play. But if we’re talking about a match play host, why not head to Georgia to Ohoopee Match Club? That’s the entire point of the place, after all: Risk-reward match play heaven.

Colgan: Ohoopee is the right answer, I think — how does one choose against a course literally built for match play? But for argument’s sake, how about National? Shinnecock’s sister course hosted Justin Thomas and Matt Fitzpatrick at the Walker Cup in 2013, so we know it’s possible. Playability, difficulty, history, excitement, secrecy — National has it ALL.

5. One of the most exciting weeks of the tournament season is upon us, with not only the first women’s major of the year, the ANA Inspiration, on deck but also the Augusta National Women’s Amateur; the first two rounds of the ANWA will be at Champions Retreat (Wednesday and Thursday) followed by the third and final round at Augusta National (Saturday). Which story line from those two events most has your attention?

Zak: I’m just hyped for major championship golf. And holy cow, Inbee Park smacking around the LPGA Tour this weekend was impressive. She’s suddenly the favorite (of some kind) for the first major of the year. She continues to amaze.

Sens: One of the many reasons watching the women at Augusta is so great is that we get to see the course played as it once did in the days before the back-nine par-5s played driver, mid-iron. It brings more of the drama and strategy back into the mix.

Dethier: All of it. I’m excited to watch the women battle down the stretch at the ANWA on Saturday afternoon, with the ANA finale coming the next day, college hoops’ national championships right after that and then Masters Week to follow. It’s an embarrassment of sports riches and we should soak up every moment. The story I’m most invested in is whether Nelly Korda can get into contention and ultimately close out her first major championship.

Colgan: Rose Zhang won one of the most heart-thumping amateur titles in recent memory at the 2020 Women’s Am, a tournament that just happened to conclude as the leaders made the turn on Sunday at the PGA Championship in August. She enters the ANWA the No. 1 amateur in the world and presumptive favorite. Can she write a historic second chapter in her amateur career? I’m stoked to find out.

6. Back to match play! What’s the most genius/diabolical bit of gamesmanship an opponent has played on you in a match?

Zak: ‘Icing’ me on the first tee. For the uninitiated, an Icing occurs when a “friend” places a Smirnoff Ice in a conspicuous location. The rules are, whoever sees the Ice first must open it, take a knee and chug it. So when I had placed my tee in the ground on the first hole, I turned around to see an Ice next to the nearby tee marker. Drinking before the round even got started.

Sens: I’m too dumb to be susceptible to mind games. But I did once see a guy concede a putt to his opponent in a match the second after the putt was struck. The rules don’t allow that. But it’s not a bad way to try to get under someone’s skin

Dethier: I had one college teammate who would screw with us during practice matches by asking mind-bending questions as we were standing over pivotal tee shots. Two favorites: “Do you breathe in or out right before you swing?” and “What part of the golf ball do you look at when you’re hitting?” Devastating.

Colgan: Didn’t happen to me, but my grandfather was notorious for inconspicuously flipping out his son-in-laws’ Pro V1s with exploding golf balls. As one can imagine, it’s rather unsettling to have a tee shot detonate upon impact, irrespective of whether you’re subsequently awarded a mulligan.