Pamela Anderson is one step closer to leaving Malibu behind for her new life in the Pacific Northwest.

The Baywatch star is reportedly ‘in escrow’ on her massive $15million mansion in the exclusive Malibu Colony as she sets up a new home with bodyguard husband Dan Hayhurst in her native Canada, according to TMZ.

The 53-year-old Playboy cover girl listed the four-bedroom oceanfront home she has owned for decades in March for $14.9million, but its unclear what closing offer was accepted or when the purchase will be finalized. 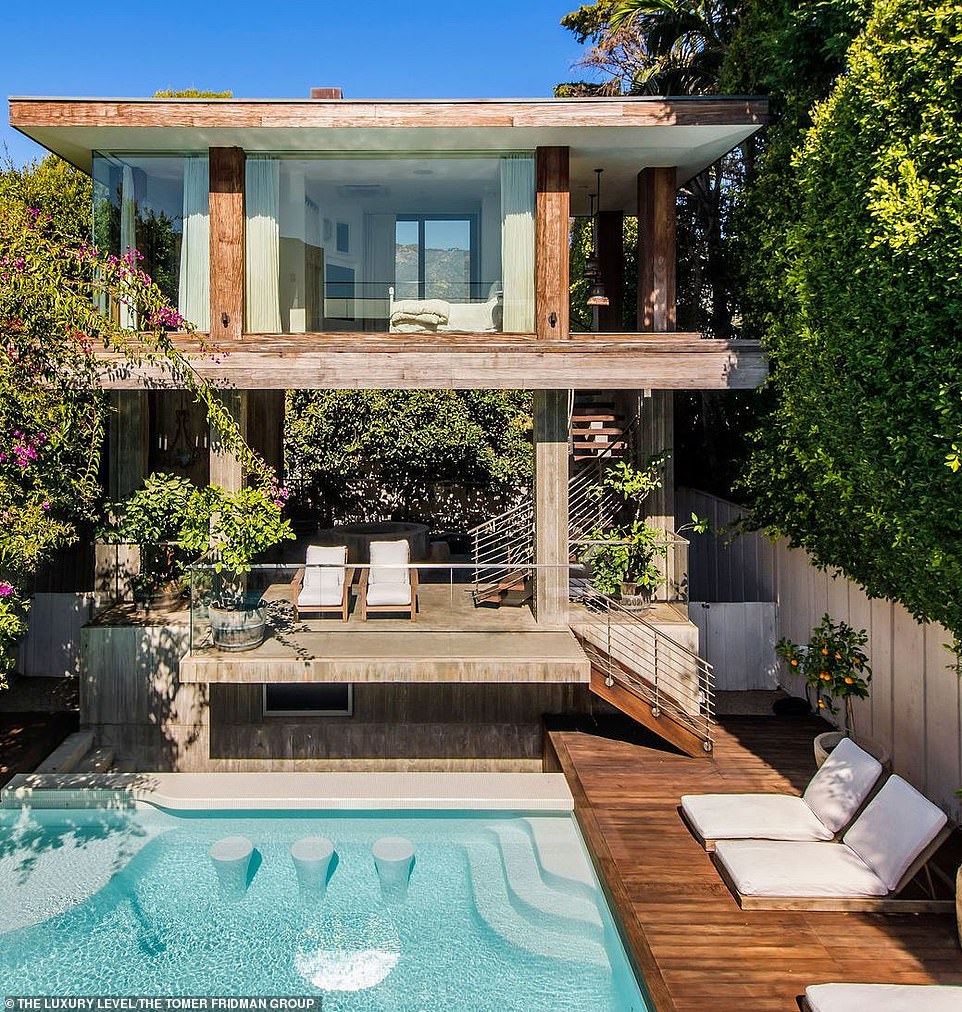 On the market: Pamela Anderson is taking a big step to change her life. The 53-year-old Baywatch actress revealed on Thursday that she will be listing the exclusive Malibu Colony home she has owned for decades to start a new life with her bodyguard husband Dan Hayhurst 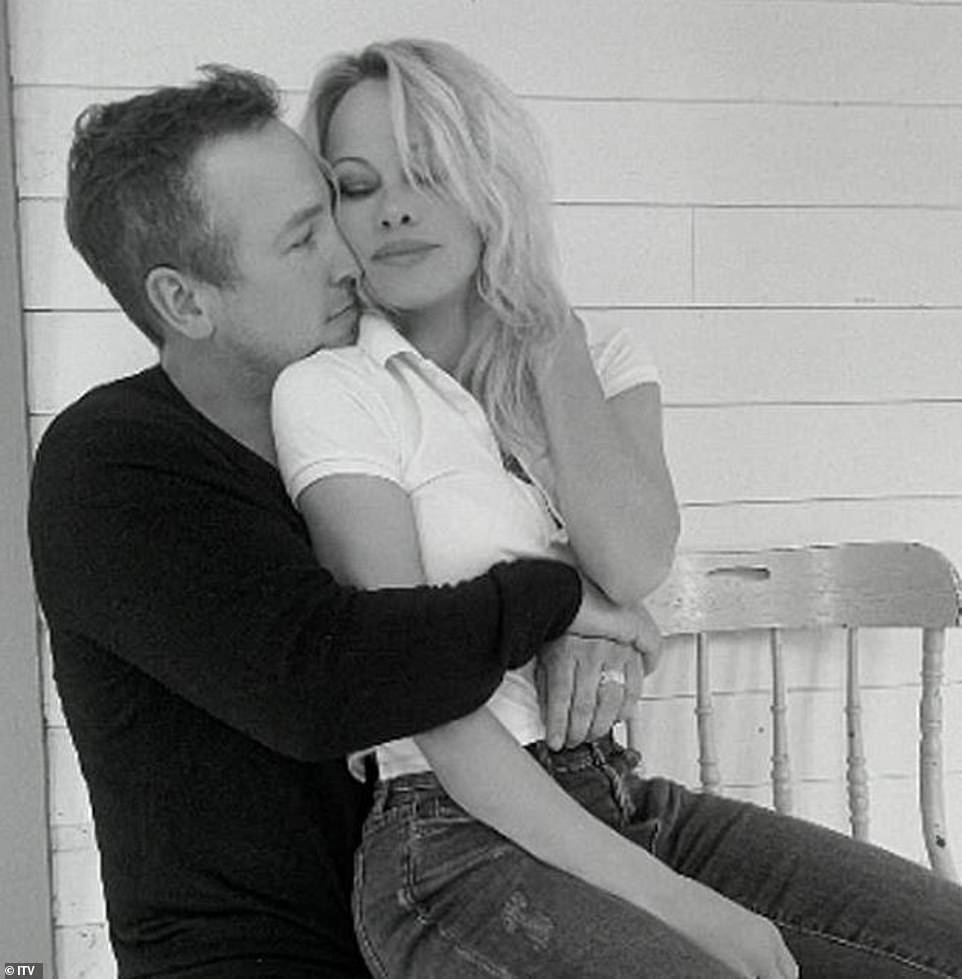 The new man in her life: The TV star wed her bodyguard Dan and wants to start a new life with him in Canada

The property is roomy with four bedrooms and four-and-a-half bathrooms in what looks like a very modern tree house. The unusual structure was designed by architect Philip Vertoch.

There is a rooftop deck with a fireplace which is perfect for watching the sunset over dinner.

And the property also includes a sizable blue-bottom swimming pool that includes built-in stools and am all-wood sauna. 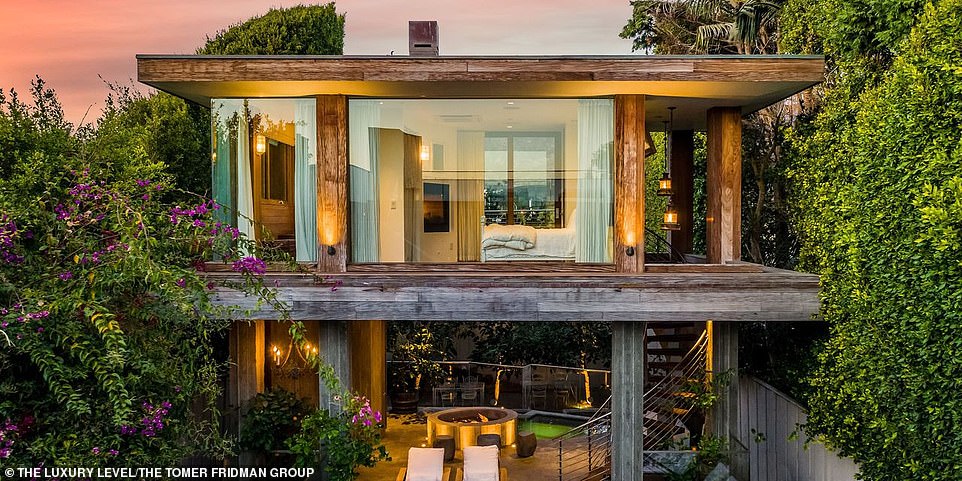 Fun look: The property is roomy with four bedrooms and four-and-a-half bathrooms in what looks like a very modern tree house. The unusual structure was designed by architect Philip Vertoch 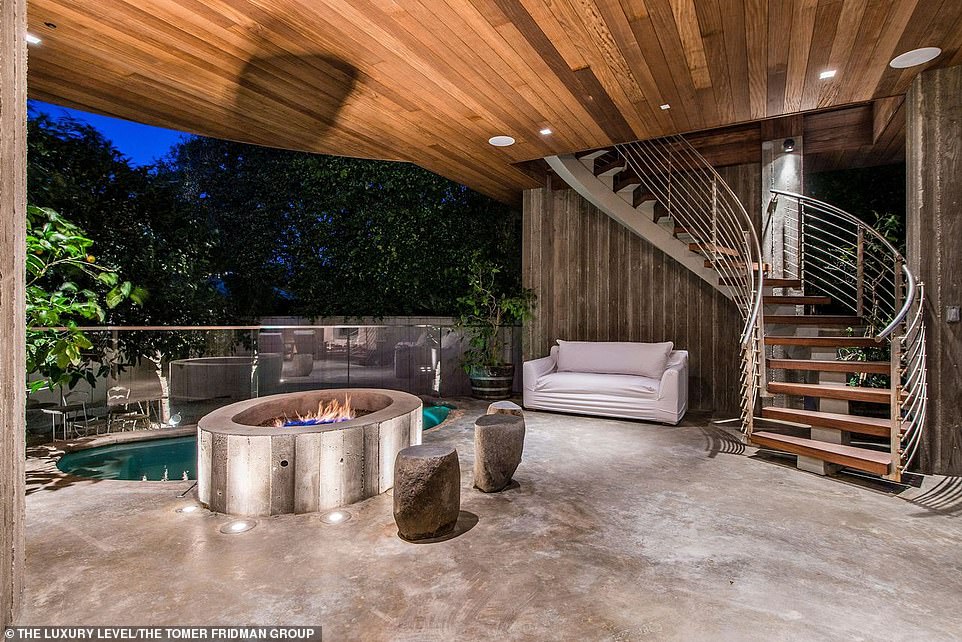 A great place to host the VIPs of Malibu: There is also a floor that is open air and has a fire pit along with a hot tub and plenty of room for outdoor furniture 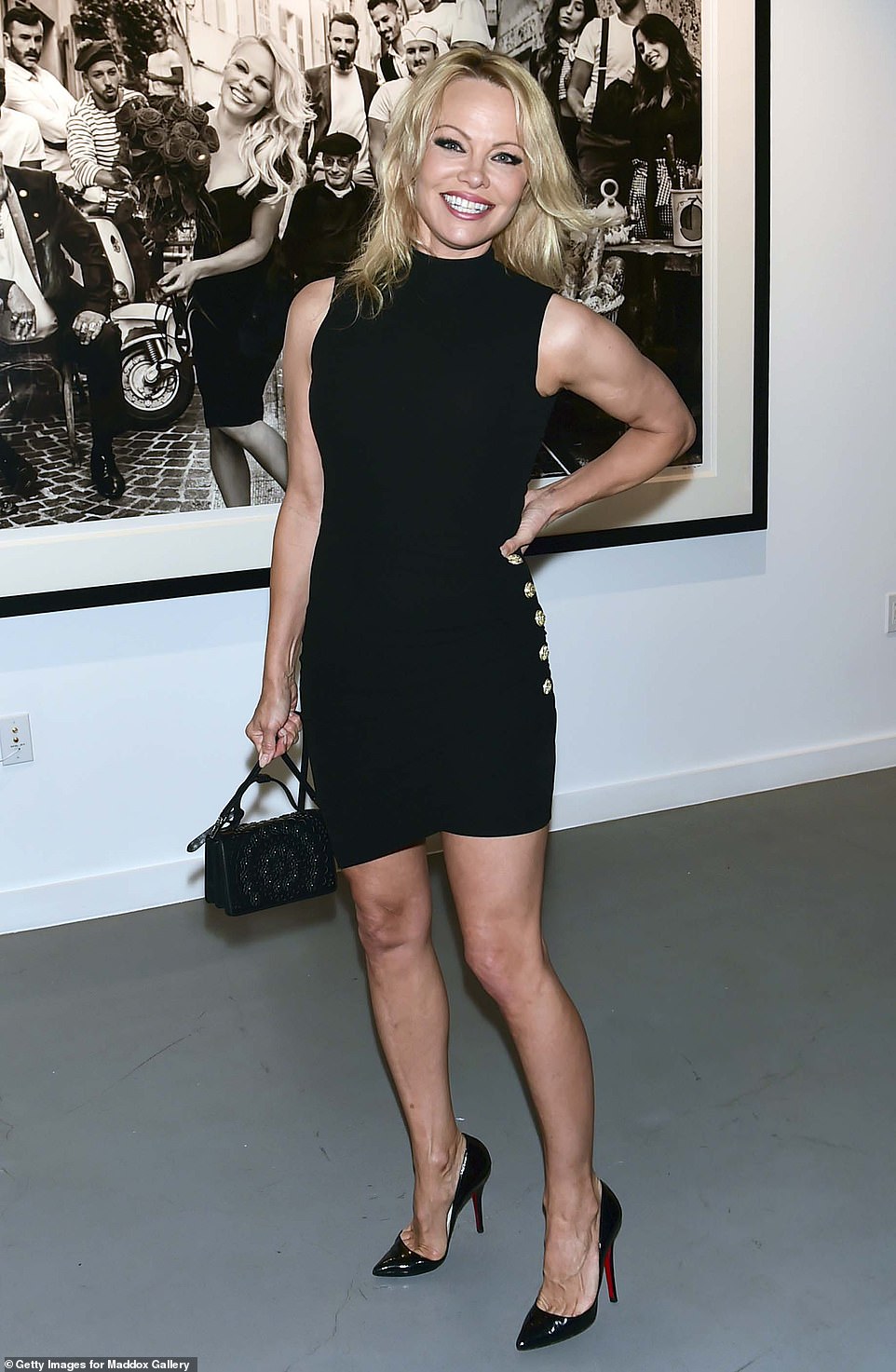 Pam grew up in Vancouver before making her way to Hollywood to become a famous actress with roles on Baywatch, Home Improvement and V.I.P.; seen in 2019 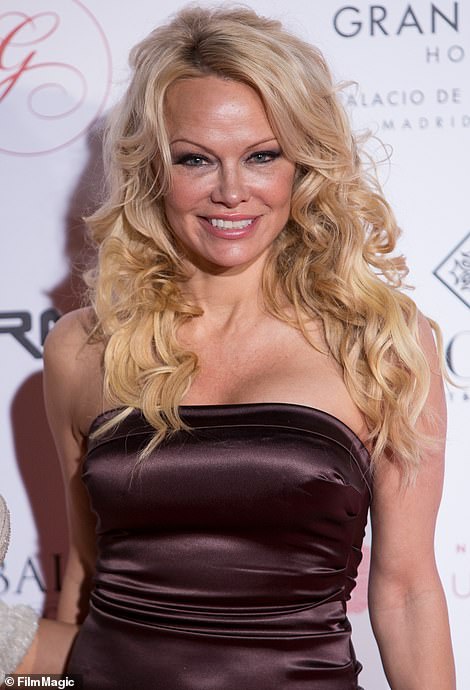 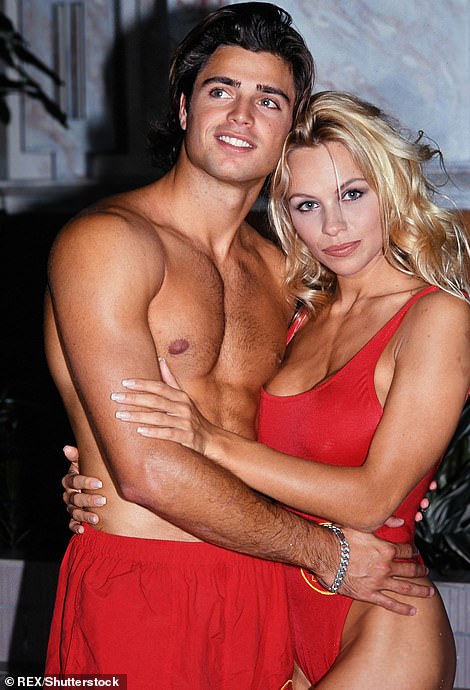 She has had a fun life: The siren seen on the left in 2018 in Spain; on the right the star is seen with David Charvet on the long-running TV show Baywatch 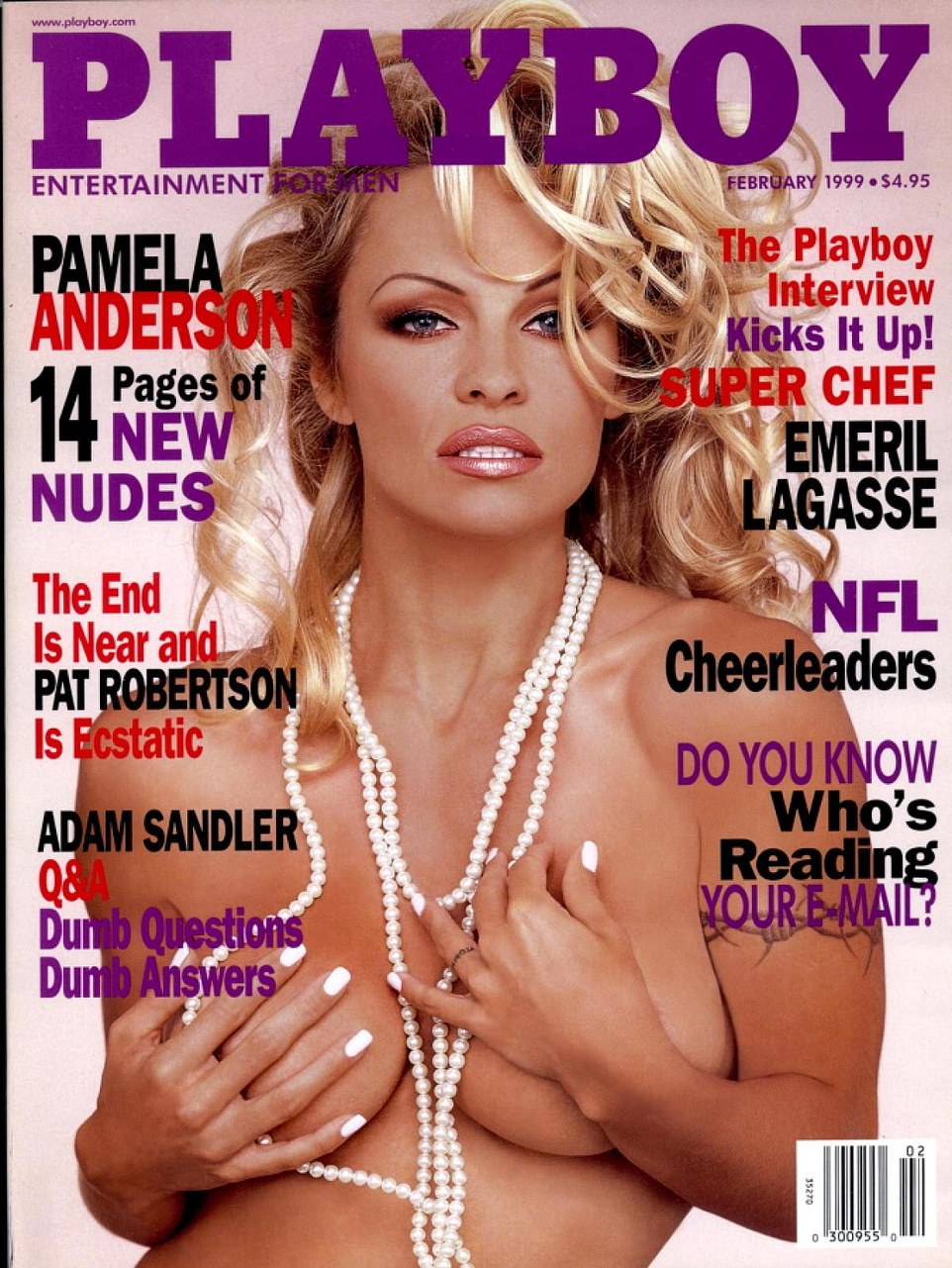 She was a friend of Hugh Hefner’s: Playboy magazine is what brought the Barb Wire star to Hollywood in the first place

The lot is an impressive 6,324-square-feet and lined with mature trees.

There is a guest house too that has plenty of room for a living room, dining room and bar.

The property is coveted because it also comes with beach access that offers plenty of privacy from tourists due to its location.

‘I love it and it’s the most sensual and clean space with a rain shower on a teak floor and sauna attached plus a bathtub is in my bedroom,’ the Stacked actress shared. 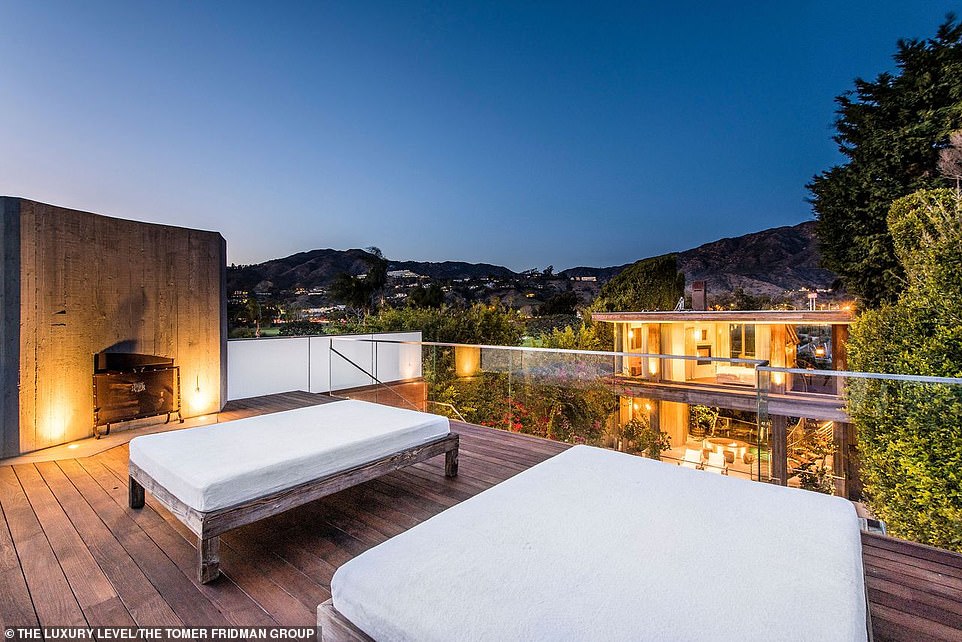 A big plus: There is a rooftop deck with a fireplace which is perfect for watching the sunset over dinner

‘The Malibu market has become the destination of choice for high net worth and ultra-high net worth individuals from across the nation,’ Fridman told the site.

‘Malibu Colony, in particular, is one of Los Angeles’s most important enclaves dating back to Hollywood’s heyday of ’20s glamour.’ 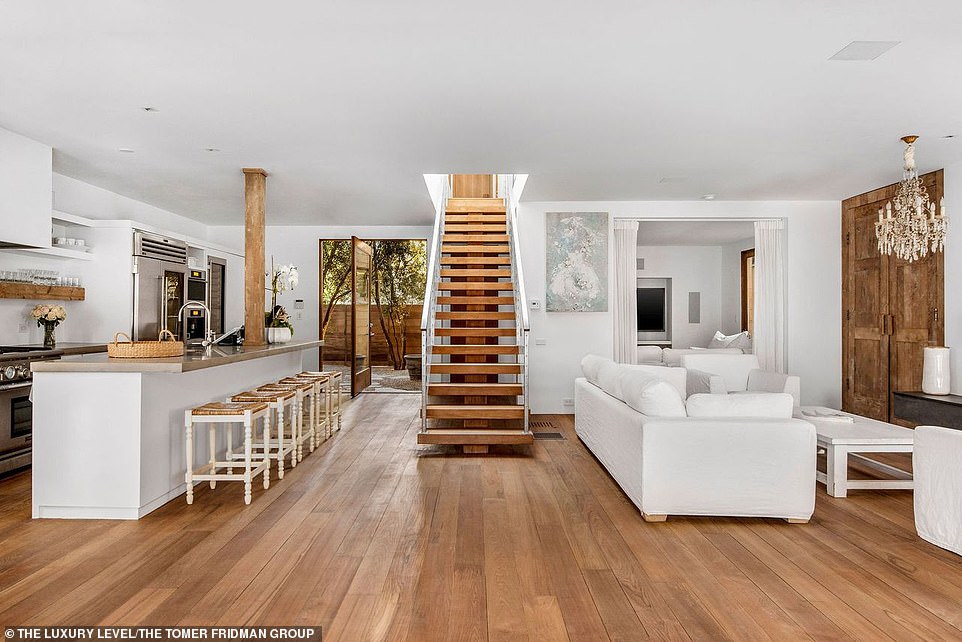 An open air feel that is calming: The wood floor kitchen has a large island that looks out to the living room space and is also connected to a yard with olive trees 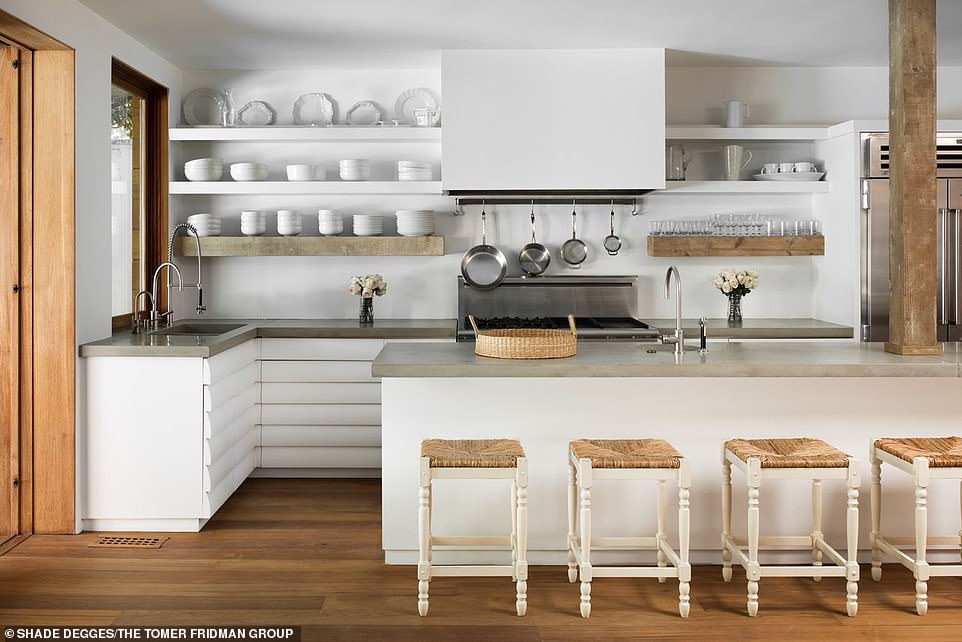 Dinner for 20? There is so much space in the chef’s kitchen that is could feed dozens if there was a large party

Listing agent Tomer Fridman of the Tomer Fridman Group tells PEOPLE that the home’s location has long been one of the most sought after by the rich and famous.

‘The Malibu market has become the destination of choice for high net worth and ultra-high net worth individuals from across the nation,’ Fridman says.

‘Malibu Colony, in particular, is one of Los Angeles’s most important enclaves dating back to Hollywood’s heyday of ’20s glamour.’ 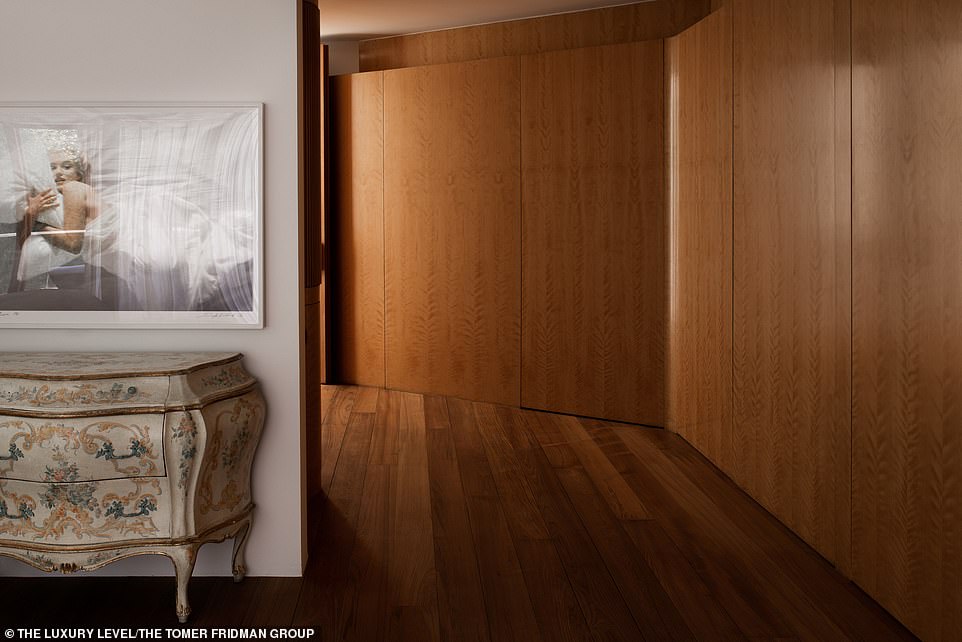 She has already been staying in her native Vancouver where she is living  on her grandmother’s former property which she bought 30 years ago.

The home is on Vancouver Island, in British Colombia, Canada.

The star has said she feels comfortable there during lockdown from the COVID-19 pandemic.

Her husband, whom she wed on Christmas Eve, is with her. The two wed on the grounds of the dwelling. 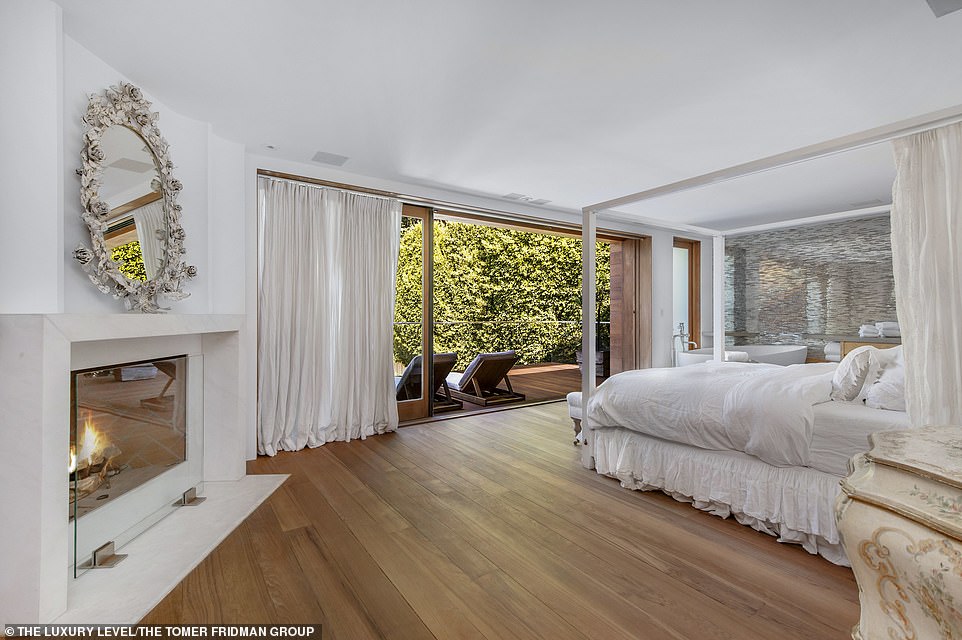 Dreamy room for slumber: The master bedroom has a fireplace as well as a balcony with a beach view 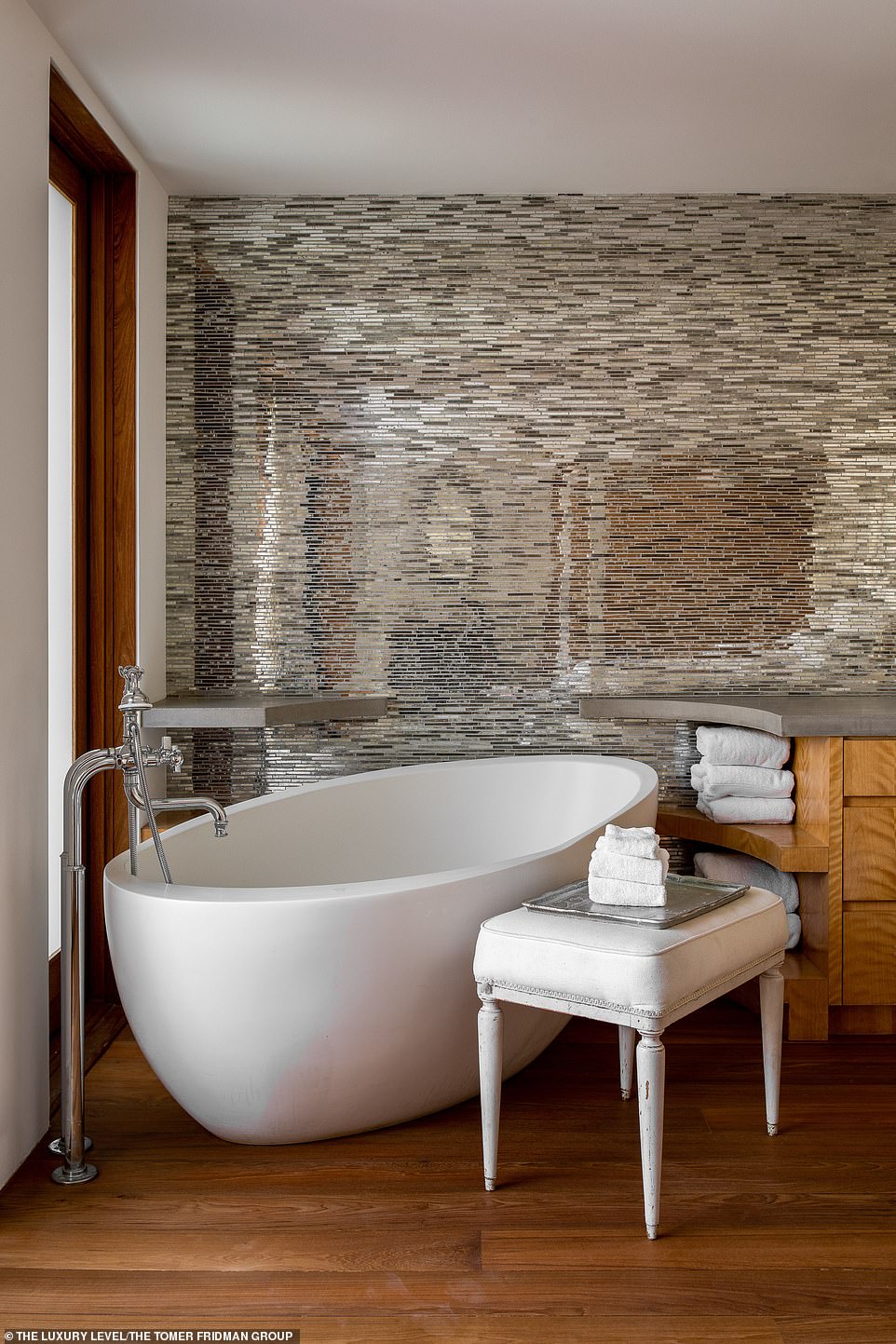 Luxury all around the place: The bathtub is stand alone and looks like an elongated egg as it is set against a tiled wall

‘It’s time I went back to my roots. I’m in love and recently married my ‘average Joe’ (as he likes to call himself),’ Pamela explains of her decision to leave Malibu behind.

‘I’m creating my life here now again where it all started. It’s been a wild ride, now full circle,’ the star says.

‘I left my small town in my early twenties for Playboy, traveled all around the world, just to come home — one of the most beautiful places on earth. I made it home in one piece, a miracle. I’m a lucky girl.’ 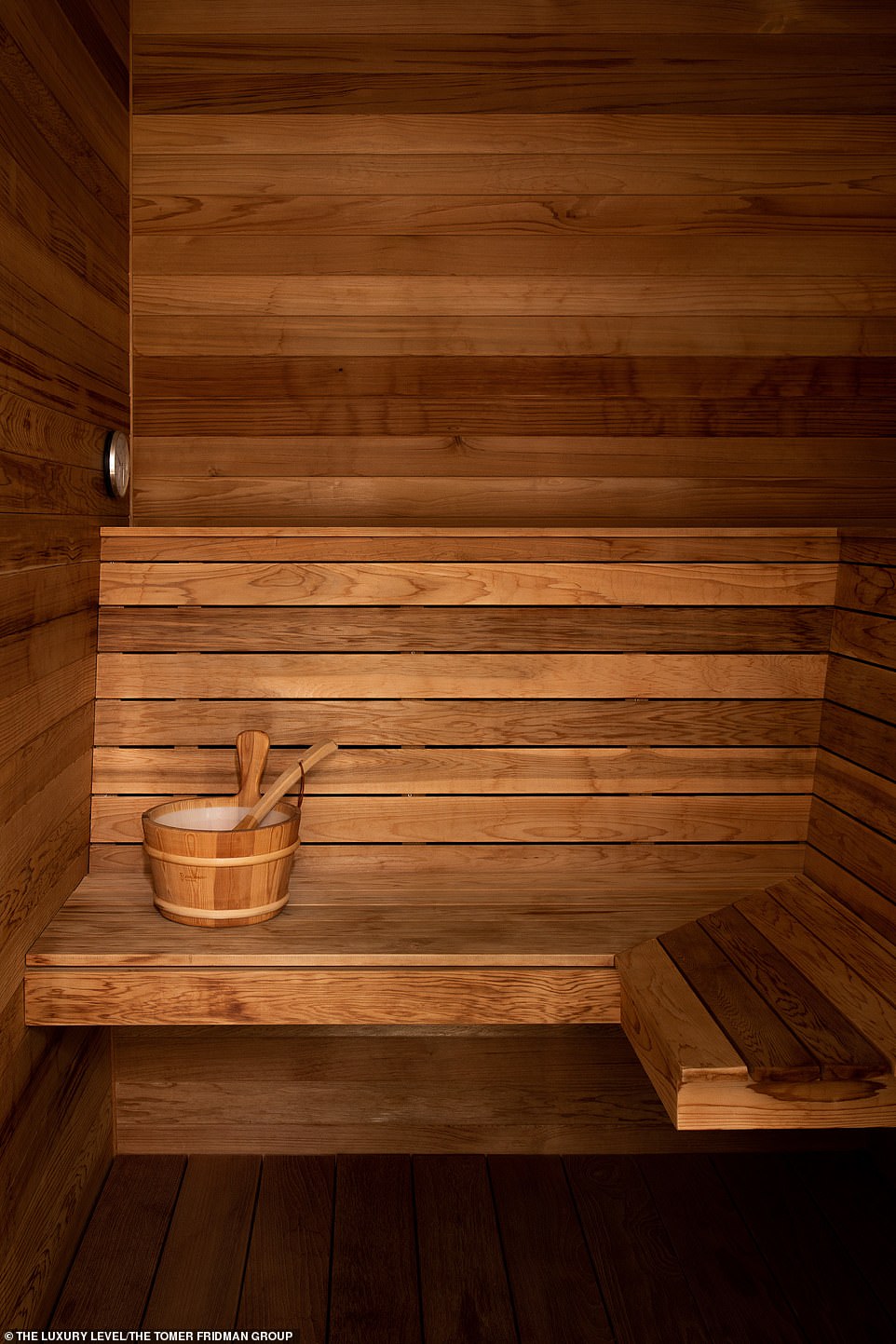 A nice play to sweat out toxins: And also located on the property is an all wood sauna, which is perfect after a swim