Shailene Woodley is soon to be Mrs. Aaron Rodgers, after confirming her engagement to the Green Bay Packers quarterback last month.

And the 29-year-old actress was spotted walking her German Shepherd in Montreal on an off day from shooting her new thriller Misanthrope on Wednesday.

The Big Little Lies star and her 37-year-old soon-to-be husband have been hunkering down together in Canada while she works, and the pair have revealed plans for kids down the line. 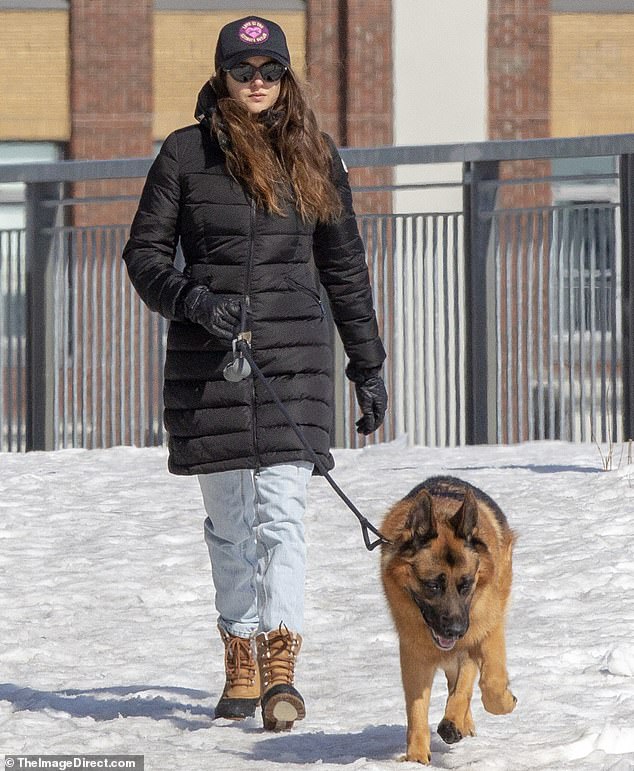 Snowy stroll: Shailene Woodley, 29, took her German Shepherd for a walk in snowy Montreal on an off day from filming Misanthrope

The California native looked prepared for the arctic temperatures as she bundled up in a black puffer jacket and warm gloves.

She wore snow boots on her feet over a pair of light wash jeans, tucking her wavy brown tresses underneath a baseball cap.

Shailene was mask free for the outing, sporting only a pair of glamorous black sunglasses on her face.

Rodgers has been a good sport while she films the serial killer thriller, as he was spotted taking her beloved pooch out for some fresh air last week. The pair had previously been in a long distance relationship. 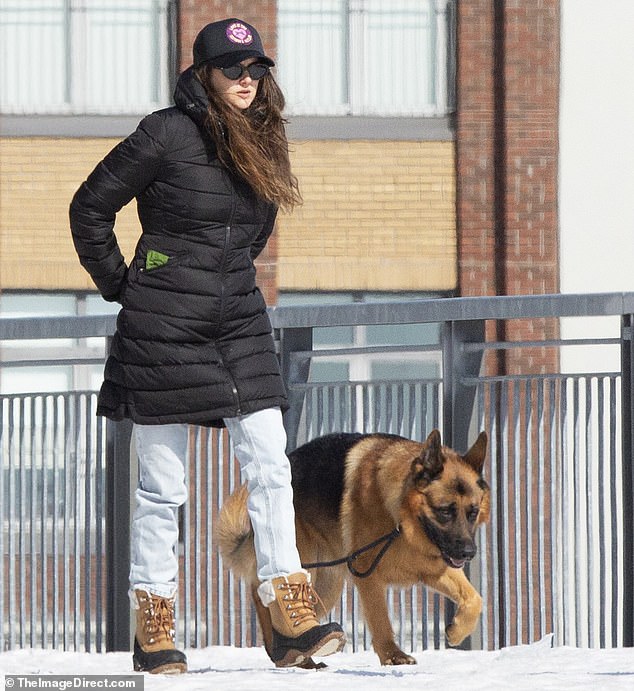 Engaged woman: Her engagement to Rodgers was announced last month, the quarterback coyly thanking his ‘fiancee’ while accepting the NFL MVP award, though he did not mention her by name

Their engagement caught many off guard, Rodgers coyly thanking his ‘fiancee’ while accepting the NFL MVP award last month, though he did not mention her by name.

Reports that the two may be an item first surfaced in July when sports blogger Terez Owens mentioned that the two were seen looking cozy on a Lake Tahoe getaway.

He had been dating professional race car driver Danica Patrick for two years, but her reps confirmed that they had split in July 2020, the couple previously shelling out $28M for a Malibu beach house in December 2019.

In September Rodgers spoke about having an ‘increased love of life’ on the The Pat McAfee Show. ‘There’s just a lot of things that have come together in my life over the last few months that have really been enjoyable,’ he said. 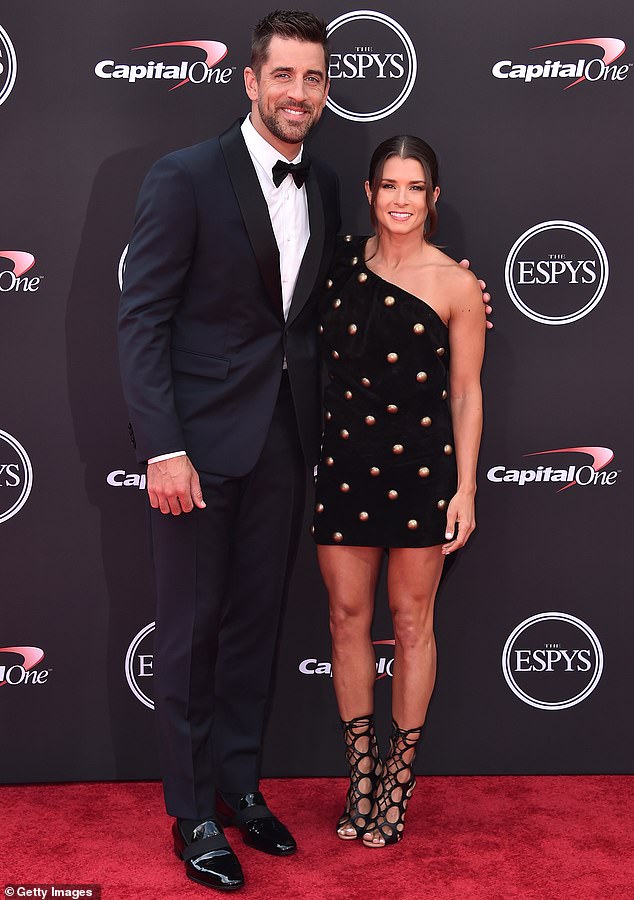 Overlap? A sports blogger first reported that Rodgers and Woodley may be an item when they were spotted getting cozy in July, right around the time Patrick’s reps confirmed she and the quarterback had split after two years; Aaron and Danica pictured 2018 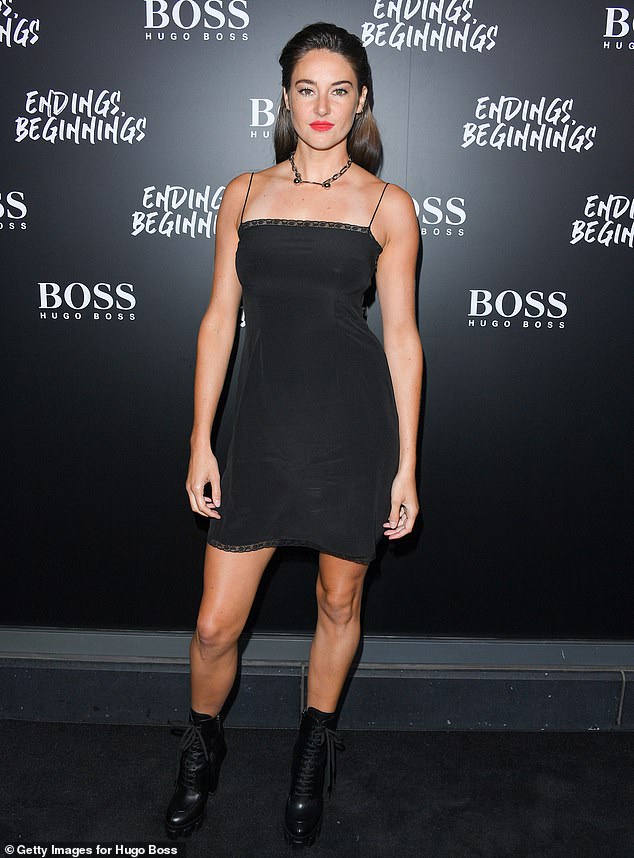 Moving on: It seems the pair connected during quarantine at some point, but it was only announced they were dating just days before he shared he was engaged; pictured 2019

Just days before he announced he was engaged on February 6, a source confirmed their romance to Us Weekly.

‘They started off as friends, but things have turned romantic,’ the source said, also adding that though long distance, ‘they are making it work.’

People was the first outlet to identify that the fiancee in question was indeed Woodley, her later confirming they had been ‘engaged for a while’ on a February 22 appearance on The Tonight Show with Jimmy Fallon.

‘Yes, we are engaged. But for us, it’s not new news, you know? So it’s kind of funny. Everybody right now is freaking out over it and we’re like, “Yeah, we’ve been engaged for a while,”‘ she said while flashing a glimpse of her ring.

The Fault In Our Stars actress continued to call him ‘a wonderful, incredible human being,’ while sharing that she ‘never thought [she’d] be engaged with somebody who threw balls for a living,’ having never seen a football game prior to meeting him. 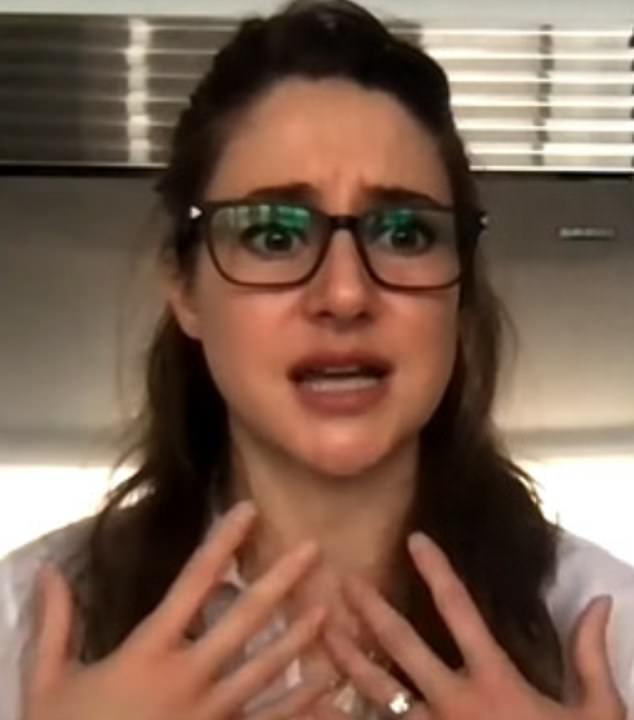 Engaged: She confirmed the engagement in conversation with Fallon saying they had been ‘engaged for a while’; February 2020 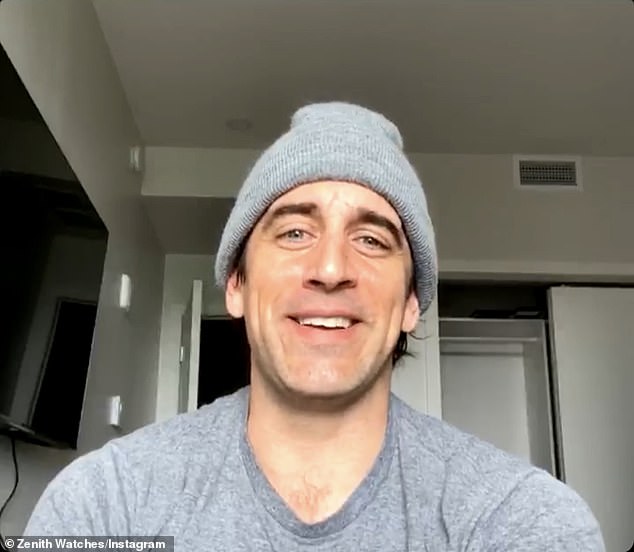 Public admiration: He told Zenith Watches CEO Julien Tornare that she was the ‘best thing’ to happen to him this year, while teasing plans for fatherhood

With their engagement out in the open, he has continued to gush about her publicly calling her ‘the best thing that’s happened to me in the last year,’ on an Instagram live.

Despite not being married, he revealed that he is eager to tackle fatherhood with her down the line, calling it ‘the next great challenge.’

‘I’ll look forward to taking care of another life at some point. I think it’s gonna be so fun. I’ve dreamt about what that will be like, I’m really excited about that chapter whenever that comes,’ he said.

The busy actress was in a three year relationship with Fijian rugby player Ben Volavola, and she shared in April 2020 with Bustle that they were ‘very much on the road to marriage and children.’

They split in 2020, her telling the publication, ‘I wasn’t able to fully commit because I didn’t fully love myself.’ 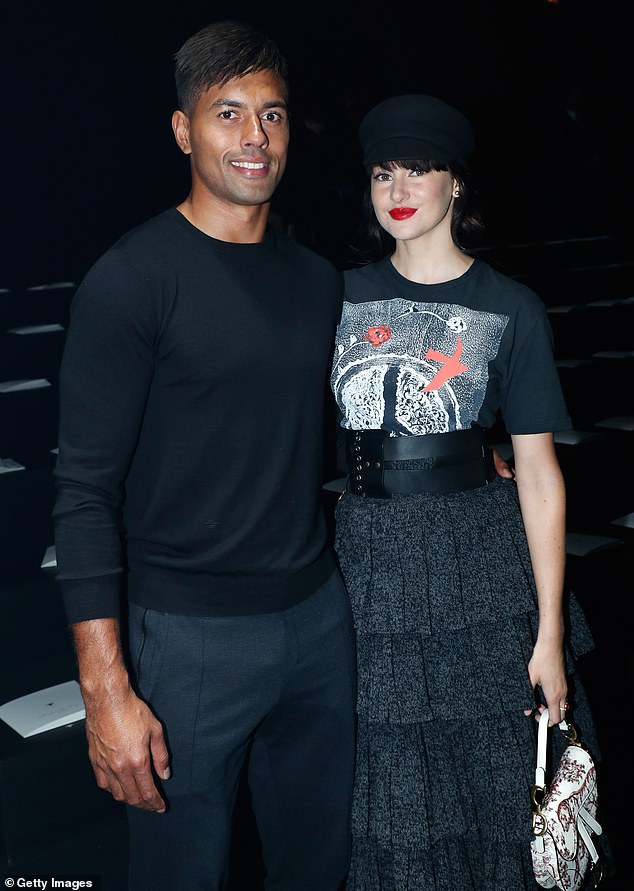 Former flame: The busy actress was in a three year relationship with Fijian rugby player Volavola, and she shared in April 2020 with Bustle that they were ‘very much on the road to marriage and children’; pictured 2019