Terrifying new species of dinosaur dubbed ‘the one who causes fear’

A newly discovered species of dinosaur has been dubbed ‘the one who causes fear’ for its immense size and brutal feeding habits.

Llukalkan aliocranianus was a ‘fearsome killer’ that roamed South America around 80 million years ago, towards the end of the age of dinosaurs.

Cranial remains studied by paleontologists at the National University of San Luis in Argentina reveal a short, stunted skull and sharp teeth.

Reaching lengths of 16 feet (five metres), it had huge claws and a keen sense of smell to track its prey, which it would have caught while moving at speed thanks to powerful hind legs.

The species was ‘likely among the top predators’ throughout Patagonia, now in Argentina, during the Late Cretaceous period, which spanned from 100.5 million to 66 million years ago.

It was a ‘lookalike’ of the famous tyrannosaurs, which ruled the Northern Hemisphere around 80 million years ago. 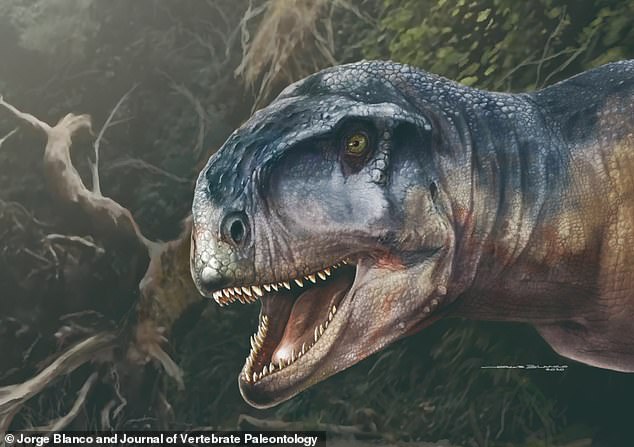 Jorge Blanco’s artist impression of Llukalkan aliocranianus. A fearsome killer, it was ‘likely among the top predators’ throughout Patagonia, now in Argentina, during the Late Cretaceous period

Abelisauridae were a striking family of theropod dinosaurs averaging 16 to 30 feet long that prowled mainly in Patagonia and other areas of the ancient southern supercontinent Gondwana.

When Tyrannosaurus and its relatives roamed North America and Asia, the abelisaurids occupied a similar niche in Patagonia and other areas of South America.

Abelisaurids had huge jaws. Just like T-Rex, they relied on them to crush and kill prey.

But abelisaurids had even tinier arms than the tyrannosaurs.

L. aliocranianus represents not only a new species, but a new genus.

Its full name comes from the native Mapuche for ‘one who causes fear’ – (Llukalkan) and the Latin for ‘different skull’ (aliocranianus).

It was one of 10 abelisaurids species known to science that was flourishing in the southern continents.

Abelisaurids were the dominant predators in the Southern hemisphere, around the same time that tyrannosaurids roamed North America and Asia.

They were part of the wider theropod clade of massive bipedal meat-eaters with sharp grasping claws.

‘This is a particularly important discovery because it suggests that the diversity and abundance of abelisaurids were remarkable, not only across Patagonia, but also in more local areas during the dinosaurs’ twilight period’, said lead study author Dr Federico Gianechini at the National University of San Luis, Argentina.

‘This discovery also suggests that there are likely more abelisaurid out there that we just haven’t found yet.’

The fossilised remains of Llukalkan include a superbly preserved and uncrushed braincase.

They were discovered in the Bajo de la Carpa Formation, in the Argentine province of Neuquén.

The species’ most distinctive feature is a small posterior air-filled sinus in the middle ear zone that has not been seen in any other abelisaurid found so far. 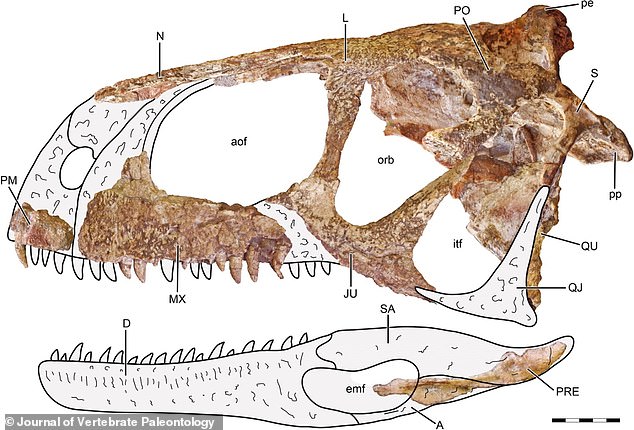 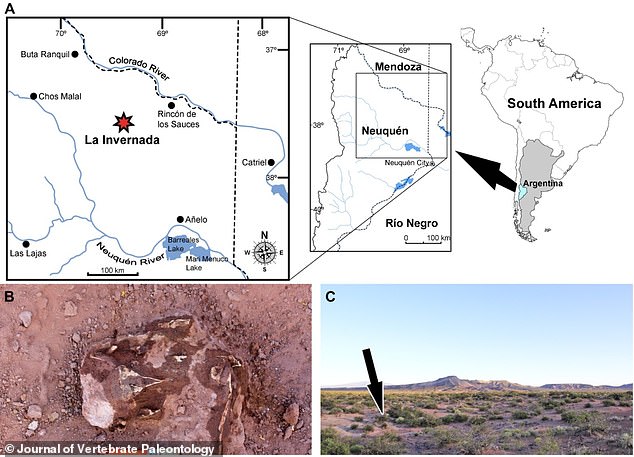 The make-up of its skull suggests its hearing was better than most of the other abelisaurids and similar to that of modern-day crocodiles.

In life, its head had bulges and prominences like some of today’s reptiles such as the Gila monster.

Fossil evidence of Llukalkan’s adaptations suggests that abelisaurids were flourishing right before the dinosaurs went extinct.

‘These dinosaurs were still trying out new evolutionary pathways and rapidly diversifying right before they died out completely,’ said co-author Dr Ariel Mendez from the Patagonian Institute of Geology and Palaeontology, Argentina.

L. aliocranianus lived in the same small area and period of time as another species of abelisaurid – Viavenator exxoni – just a few million years before the end of the age of dinosaurs. 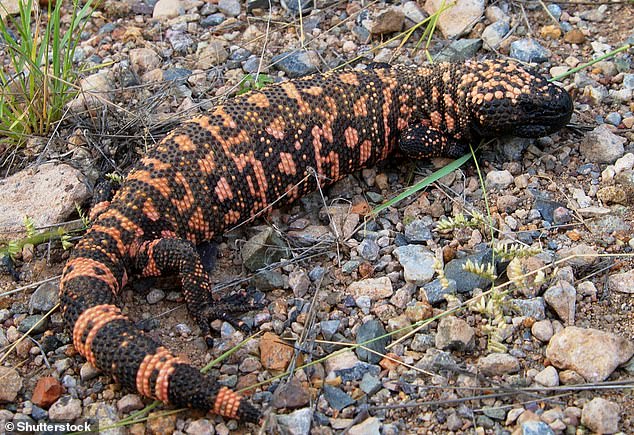 Fossil remains of the two genera Llukalkan and Viavenator were found 2,200 feet (700 metres) apart in the Bajo de la Carpa Formation, near the same famous fossil site at La Invernada.

This new species is similar in many respects to Viavenator, except that it is smaller, and the holes in the skull through which the veins pass are larger and more widely separated from the supraoccipital crest – a bone that forms the braincase.

The study of published today in the Journal of Vertebrate Paleontology.

HOW THE DINOSAURS WENT EXTINCT AROUND 66 MILLION YEARS AGO

Dinosaurs ruled and dominated Earth around 66 million years ago, before they suddenly went extinct.

The Cretaceous-Tertiary extinction event is the name given to this mass extinction.

It was believed for many years that the changing climate destroyed the food chain of the huge reptiles.

In the 1980s, paleontologists discovered a layer of iridium.

This is an element that is rare on Earth but is found  in vast quantities in space.

When this was dated, it coincided precisely with when the dinosaurs disappeared from the fossil record.

A decade later, scientists uncovered the massive Chicxulub Crater at the tip of Mexico’s Yucatán Peninsula, which dates to the period in question.

Scientific consensus now says that these two factors are linked and they were both probably caused by an enormous asteroid crashing to Earth.

With the projected size and impact velocity, the collision would have caused an enormous shock-wave and likely triggered seismic activity.

The fallout would have created plumes of ash that likely covered all of the planet and made it impossible for dinosaurs to survive.

Other animals and plant species had a shorter time-span between generations which allowed them to survive.

There are several other theories as to what caused the demise of the famous animals.

One early theory was that small mammals ate dinosaur eggs and another proposes that toxic angiosperms (flowering plants) killed them off.