Trump and Giuliani sued by Democratic congressman over Capitol riot

Donald Trump and Rudy Giuliani, the former president’s personal lawyer, have been accused of conspiring to incite the violent riot at the US Capitol

in a legal action filed under a historic law known as the Ku Klux Klan Act. 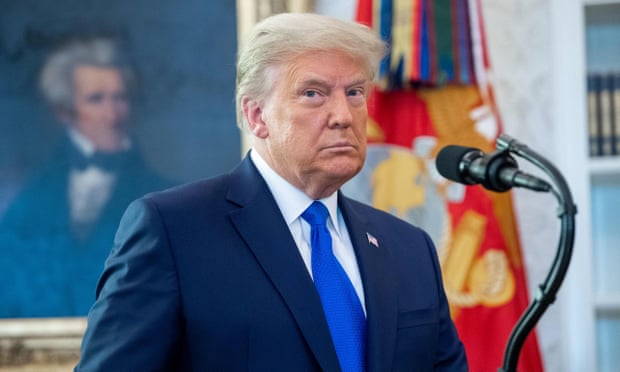 The lawsuit was brought on Tuesday by the Democratic congressman Bennie Thompson of Mississippi and the eminent civil rights organisation the National Association for the Advancement of Colored People (NAACP).

It comes three days after Trump was acquitted by the US Senate on a charge of inciting the 6 January insurrection, only for the minority leader, Mitch McConnell, who voted to acquit, to point out that presidents are “not immune” to being held accountable by criminal or civil litigation.

The suit alleges that Trump, Giuliani and the extremist groups the Proud Boys and Oath Keepers conspired to incite the attack on the Capitol with the goal of preventing Congress from certifying Joe Biden’s win in the presidential election.

It argues that they therefore violated a law often referred to as the Ku Klux Klan Act, passed in 1871 in response to Klan violence and intimidation preventing members of Congress in the Reconstruction south from carrying out their constitutional duties. The NAACP, founded in 1909, says the statute was designed to protect against conspiracies.

Joseph Sellers, who is with the Washington law firm Cohen Milstein and filed the lawsuit on Thompson’s behalf, told the Associated Press: “Fortunately, this hasn’t been used very much. But what we see here is so unprecedented that it’s really reminiscent of what gave rise to the enactment of this legislation right after the civil war.”

Thompson, who chairs the House homeland security committee, was among members of Congress who donned gas masks and were rushed to shelter in an office building during the mayhem of 6 January, in which five people died. Members of he Proud Boys and Oath Keepers have been charged with taking part in the riot.

Thompson said in a statement that Trump’s “gleeful support of violent white supremacists led to a breach of the Capitol that put my life, and that of my colleagues, in grave danger. It is by the slimmest of luck that the outcome was not deadlier.

“While the majority of Republicans in the Senate abdicated their responsibility to hold the President accountable, we must hold him accountable for the insurrection that he so blatantly planned. Failure to do so will only invite this type of authoritarianism for the anti-democratic forces on the far right that are so intent on destroying our country.”

Filed on Tuesday in federal district court in Washington, the suit charts an expansive effort by Trump and Giuliani to undermine the election result despite state officials and courts rejecting their false allegations of fraud. The two men portrayed the election as stolen while Trump “endorsed rather than discouraged” threats of violence from his supporters leading up to the attack on the Capitol, the suit says.

“The carefully orchestrated series of events that unfolded at the Save America rally and the storming of the Capitol was no accident or coincidence,” it continues. “It was the intended and foreseeable culmination of a carefully coordinated campaign to interfere with the legal process required to confirm the tally of votes cast in the Electoral College.”

Presidents are typically shielded from the courts for actions carried out in office but this one focuses on Trump in his personal rather than official capacity. Seeking unspecified punitive and compensatory damages, it alleges that none of the conduct at issue is related to Trump’s responsibilities as president.

Sellers explained: “Inciting a riot, or attempting to interfere with the congressional efforts to ratify the results of the election that are commended by the constitution, could not conceivably be within the scope of ordinary responsibilities of the president. In this respect, because of his conduct, he is just like any other private citizen.”

Trump faces a potential slew of lawsuits now he has lost the legal protections of office. Additional actions could be brought by other members of Congress or police officers injured in the riot, a prospect acknowledged by the White House on Tuesday.

Jen Psaki, the press secretary, told reporters Biden “certainly supports the rights of individuals, members of Congress and otherwise, to take steps through the judicial process but I don’t think we have a further comment on it than that”.

She added: “I am not going to speculate on criminal prosecution from the White House podium. The president has committed to having an independent justice department that will make their own decision about the path forward.”

Trump defence lawyers are expected to argue that his speech was protected by the first amendment to the constitution and point out that, in a speech on 6 January, he told supporters to behave “peacefully”.

Jason Miller, a Trump adviser, said in a statement Trump had not organised the rally that preceded the riot and “did not incite or conspire to incite any violence at the Capitol on 6 January”.

Could ‘sombre’ Covid apology be start of Boris Johnson fightback?