House impeachment managers will open their prosecution of Donald Trump for “incitement of insurrection” by recounting the deadly assault on the US Capitol in harrowing and cinematic detail, rekindling for senators the chaos and trauma they experienced on 6 January. 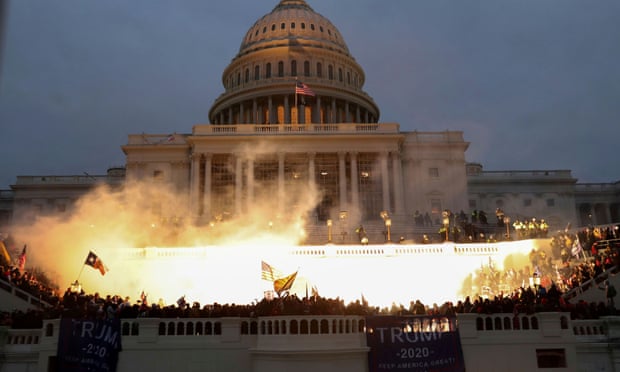 The historic second impeachment trial will open on Tuesday, on the Senate floor that was invaded by rioters, with a debate over the constitutionality of the proceedings. In a brief filed on Monday, Trump’s lawyers assailed the case as “political theater” and argued that the Senate “lacks the constitutional jurisdiction” to try a former president after he has left office – an argument Democrats promptly rejected.

Exactly one week after the Capitol assault, Trump became the first president to be impeached twice by the House of Representatives. This week, he will become the first former president to stand trial. It would take 17 Republicans joining all Democrats in the Senate to find Trump guilty, making conviction highly unlikely.

Nevertheless, when opening arguments begin later this week, House Democrats will try to force senators to see the assault on the Capitol as the culmination of Trump’s long campaign to overturn the result of the election he lost to Joe Biden.

Relying on troves of video and audio recordings, impeachment managers, led by the Maryland congressman Jamie Raskin, will try to marshal the anger and outrage many members of Congress expressed in the aftermath of the riot, which sought to prevent Congress from formalizing Biden’s victory based on Trump’s false claim that the election had been “stolen”.

In a 78-page brief submitted to the Senate on Monday, Trump’s lawyers laid out a two-pronged rebuttal, also arguing that Trump bore no responsibility for the Capitol attack and that his rhetoric was protected under the first amendment.

“The intellectual dishonesty and factual vacuity put forth by the House managers in their trial memorandum only serve to further punctuate the point that this impeachment proceeding was never about seeking justice,” his lawyers, Bruce Castor, David Schoen and Michael van der Veen, wrote, accusing the Democratic lawmakers of attempting to “callously harness the chaos of the moment for their own political gain”.

Yet several of his supporters who were arrested in connection with the Capitol assault have directly implicated Trump in court filings and media interviews, saying they were acting at his behest.

In their response, the House managers said Trump’s defense was “wholly without merit” and called the evidence proving Trump not only incited the riot but failed to take action once it was under way “overwhelming”.

“His incitement of insurrection against the United States government – which disrupted the peaceful transfer of power – is the most grievous constitutional crime ever committed by a president,” they wrote. “There must be no doubt that such conduct is categorically unacceptable.”

The first clash between Trump’s legal team and the House impeachment managers will occur on Tuesday, when they will have four hours to debate and vote on the question of whether the constitution provides for a former president to be tried by the Senate for “high crimes and misdemeanors”.

If a simple majority agree the proceedings are legitimate under the constitution, as is expected, the chamber will then proceed to opening arguments on Wednesday, according to an agreement reached on Monday afternoon between the Senate majority leader, Chuck Schumer, and the Republican leader, Mitch McConnell.

While constitutional scholars across the political spectrum and a majority of senators say they believe the trial is constitutional, many Republicans have seized on the procedural argument as a way to justify support for acquitting Trump without appearing to condone his behavior.

All but five Republican senators voted to dismiss the trial as unconstitutional. Yet Chuck Cooper, a leading conservative lawyer, rejected that view in a Wall Street Journal op-ed published on Sunday.

The trial begins just more than a year after Trump was first impeached, for pressuring Ukraine to investigate Joe Biden’s family. He was acquitted by the Senate.

Americans are now more supportive of convicting Trump, according to an ABC News/Ipsos poll released on Sunday. It found that 56% of Americans believe the Senate should convict Trump and bar him from future office.

But with acquittal widely expected, Democrats and Republicans expect a speedy conclusion to the trial.

Under the terms of the agreement by the Senate’s leaders, the prosecution and defense will have up to 16 hours each to present their arguments to the Senate, beginning at noon on Wednesday. After listening silently to both parties, senators will have four hours to ask questions. House managers were also given the option for a debate and vote on calling witnesses, a major point of contention during Trump’s first trial.

The former president declined their request to testify voluntarily at the trial. It remains unclear if the managers will try to subpoena Trump or any other witnesses.

The trial was set to break Friday evening for the Jewish Sabbath at the request of Trump’s defense team, and resume Sunday. But Schoen told senators in a letter late Monday he was concerned about a delay and withdrew the request. The schedule will likely be adjusted, according to a person who spoke to the Associated Press and was granted anonymity to discuss the planning.

The managers have indicated that they intend to lay out a comprehensive case, tracing Trump’s extraordinary efforts to reverse his defeat, including a call in which he pressured the Georgia secretary of state to “find” enough votes to overturn Biden’s victory there. After being dismissed by the courts and Republican election officials, Trump turned his attention to the certification vote on Capitol Hill, encouraging supporters to attend a rally held to protest against the result, the managers will argue.

At that event, Trump implored them to “fight like hell” and march to the Capitol to register their discontent.

“He has no valid excuse or defense for his actions,” they wrote. “And his efforts to escape accountability are entirely unavailing. As charged in the article of impeachment, President Trump violated his oath of office and betrayed the American people.”