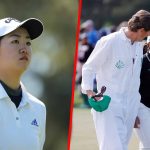 AUGUSTA, Ga. — Chaos. Beautiful, brilliant chaos. That was the scene on the 13th hole at Augusta National shortly after 2 p.m. ET Saturday.

With blue skies overhead and the first glimpse of afternoon shadows creeping into Amen Corner, Rose Zhang stepped to the tee after falling out of a tie for the lead during the final round of the Augusta National Women’s Amateur. Karen Fredgaard — the steadily charging Dane who played Augusta National’s middle six holes at four under — had supplied the perfect amount of pressure.

Zhang clutched her driver, made a sweeping practice swing and addressed her ball. A millisecond after she made contact, it was clear something was wrong. The 17-year-old grimaced as she watched her neatly marked Callaway careen directly into the left pines. Her ball appeared to strike a tree branch, dispatching a pine cone toward Rae’s Creek but failing to nestle anywhere within sight.

A few minutes later, Zhang had assembled a search crew of close to a half-dozen people, including Ingrid Lindblad (her playing partner), both of the group’s caddies and a pair of Augusta National rules officials. Not long after, Zhang rode shotgun in a golf cart back to the tee box. Her ball was a lost, and she’d have to take a one-stroke penalty.

Zhang striped her second drive down the center of the fairway and climbed back into the cart dejectedly. On her next shot, from 202 yards out, she dumped a fairway wood into Rae’s Creek in front of the green.

“I debated for a little bit,” Zhang said after her round. “I decided, well, after this shot if I’m really lucky, then I can hit it on with my fourth shot. It didn’t turn out well in the end. I definitely do think that there was some wrong course management in that area. Hopefully next time I’ll learn to improve on it.”

Just as she reached the drop area, a murmuring rippled through the gallery. The scoreboard behind the 13th green updated to show Fregaard bogeying the 14th and dropping back to 1 under. Further ahead, Emma Spitz and a little-known Japanese teenager named Tsubasa Kajitani had birdied their way to even par. With Zhang guaranteed to make at least bogey (she would make triple), suddenly four players were equally vying for the lead.

You couldn’t script better drama for an event still feeling its way into prominence. For once, the folks at Amen Corner wished they could be watching from home. And what they had coming next was even better.

Zhang — the presumptive favorite and 36-hole leader — birdied the 14th to move back to one over. Further ahead, Kajitani made a birdie of her own on the par-5 15th to move to one under. Elsewhere, Emilia Migliaccio — a senior at Wake Forest and former teammate of inaugural ANWA winner Jennifer Kupcho — signed her scorecard with a 2-under 70 for the day, good enough to make her 1 over for the tournament and the leader in the clubhouse.

After a nervy double bogey on the 17th, Katijani nearly holed out for birdie on No. 18. Instead, she tapped in for par and a tie for the clubhouse lead with Migliaccio. Zhang would bogey the 17th, then missed a 10-footer for birdie on 18, setting the stage for a sudden-death playoff between Migliaccio and Kajitani on the 18th.

On the first playoff hole, both players faced difficult long-iron shots into a front pin guarded by steep bunkers. Katijani found the middle portion of the green, while Migliaccio hit right of the left bunker, then hit into it. A brilliant sand shot from the 21-year-old from Cary, N.C., ramped up the pressure on Katijani, but she was up to the task.

“I’ve played a few professional tournaments in Japan, as well as some big tournaments in America, but you can’t really compare with this tournament,” Katijani said through an interpretor after the victory. “I think Augusta National is going to tell everything about golf, and when I missed the green, it will be really hard to recover and get up-and-down. I made a good shot, and I got through it. That’s all about Augusta, as well as the course itself is a very beautiful course.”

Some have wondered whether the field at the ANWA is capable of providing final-round drama in the same breath as what we witnessed during the Maria Fassi and Jennifer Kupcho’s inaugural duel in 2019. If Saturday was any indication, it doesn’t seem to matter much who’s holding a final-round lead at Augusta National, the result is likely to be heart-thumping. It was not always pretty (an over-par winner at Augusta National, how about that?), but for the stakeholders of the women’s game’s first event at Augusta National, it was hard to see the afternoon as anything other than a stunning success.

“It was a wonderful week. The golf course was in spectacular condition today,” Augusta National Chairman Fred Ridley said. “The 30 finalists showed why they are the best women amateur golfers in the world.”

Ridley’s stated goal for the Women’s Amateur is to “inspire golf’s future generations.”

“Bobby Jones and Clifford Roberts left behind a legacy of always trying to contribute meaningfully to the game of golf,” Ridley said in his press conference announcing the event’s creation in 2018. “The Augusta National Women’s Amateur Championship embodies that principle, and we believe this event will have a significant and lasting impact on the future of the women’s game. Our hope and expectation is that this event will further energize those who already love the sport and inspire others through the dream of competing at Augusta National.”

It’s too early to say who might have been inspired by Saturday at the ANWA, but there’s no question we were entertained.